I recently shared a veritable brain dump of 2019 intentions. It was thorough. It was lengthy. It was kind of all over the place.

Or, so it seemed.

As I wrote, I started to notice a common thread weaving its way throughout each plan, aside from my overall hope to “focus” more (kind of hilarious with such a heady list of stuff to work on). It might be a very personal, invisible thread, but it helped solidify my focus for the year a bit more.

Overall, I need to be more like my grandparents were.

I’ve spoken a little bit before about my mother’s parents. While we didn’t live with them, they helped raise my 3 siblings and I and provided additional stability after our father died. When I think about childhood, many if not a majority of the memories take place at their house and in their presence. So, to say that they were an influence would be an understatement.

They also offered us a subconscious understanding about history. Whether family history or just a sense that there were people and events and “ways” before our existence, they were lessons about continuity, perspective, and our place in the world. Old movies and music, brief little anecdotes about those who came before, and even the smell of Grandma’s spice cabinet and Grandpa’s pipe tobacco taught so much. Warm and comforting, the connections we have to the past.

Needless to say, I take those two, both gone, with me everyday. I guess I shouldn’t be surprised that I somehow found a way to tie them into my 2019 goals. And the fact that I’ve found a man to share life with who values many of these lessons, values, and even ways to pass the time? Well, I’m a lucky, lucky person.

In my intentions for the year, there’s an overall sense of “do what needs to be done.” While some of the concepts, like mindfulness, are new, buzzy catch phrases, the ideas behind them are actually very much rooted in history. Here’s how it breaks down. 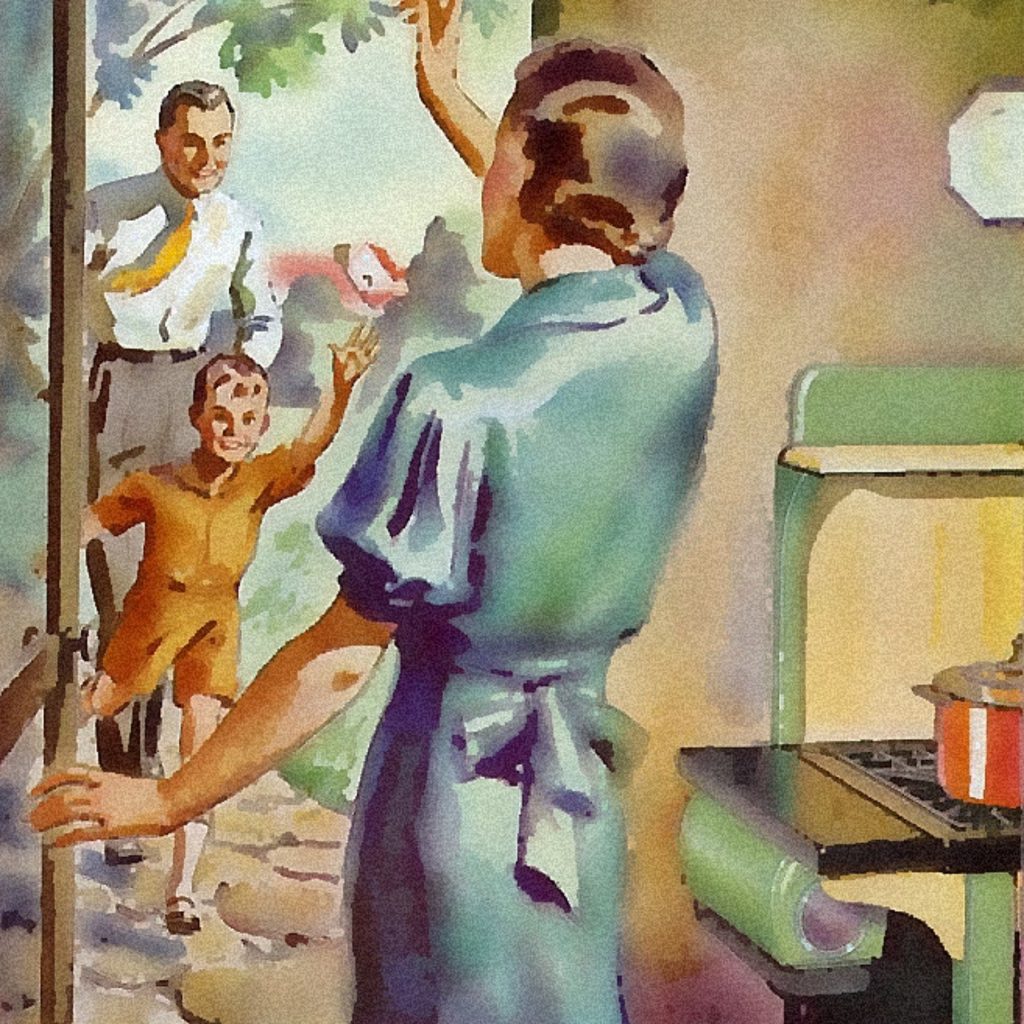 One thing at a time. While I’m sure that both Grandma and Grandpa faced amazingly stressful times (such as the time period when Grandpa worked 4 jobs or, y’know, their involvement in the war…), I never noticed them visibly taking on more than they could handle at any given moment. If we played a card game, the TV wasn’t on. If they watched a movie or the news, they WATCHED it. Reading was a quiet, almost religious experience. Jobs throughout the day were handled and there seemed to be an unspoken schedule – that there was time for work and time for rest and there was no mixing of the two or guilt when it was time to nap or relax.

So, while my day-to-day job and the juggling of kiddos may seem to require a natural need to multitask, I’m doing my best lately to look at my to-do list and prioritize what needs to get done first. I’m also not making apologies, real or to myself, when I feel the need to recharge with a mug of something warm. Like right now. 😉

Only enough, and household chores. I’ve wondered whether the idea of “purging” is something that only those “with enough” should be concerned with. But, I do recall how much stuff had been acquired (even though I wouldn’t describe my grandparents as hoarders or even collectors) when it was time to sell their house. Knowing that they both survived the Great Depression and very deeply felt the effects of it firsthand, I look at my glut of STUFF and shake my head, and have mentioned this reality to my son anytime he shrugs off the idea of “just buying a new one” when we lose or break something. We need to enjoy and cherish what we have, and let others enjoy the things we don’t have a use for.

So, simplifying and purging is the name of the game. I’m also interested in finally figuring out my outdoor landscaping and garden situation to better utilize the space and get the kids involved in some food growing.

And chores? Like I mentioned before, there was a schedule each day, even after Grandpa retired. Get up and putter. Some days there was a plan to work on something in particular (house painting comes to mind, which seemed to be Grandpa’s summer go-to when all other chores were complete); other days, we’d do a fun project like making a bird house or trying to solve a rabbit problem in the garden. Whatever it was, the day wasn’t wasted. When I look at my list, I think of my grandfather; it’s a greater motivator than any YouTube declutter video I could possibly find (although those sometimes help, too). Get up and JUST DO SOMETHING.

Journaling. People used to write in a journal all the time. I love finding an old one in an antique shop and seeing what a person’s day looked like a hundred or more years ago. Surprisingly, most of the diaries I’ve seen have only had a few words or a couple of lines devoted to each day. I think we tend to think of journaling as a lengthy, time-consuming activity, but it doesn’t need to be. While I’ve never heard or seen any diaries that my grandparents might have written, the fact that it’s very much something their generation might have done motivates me to try it out. I haven’t made it a daily thing, but I’m jotting down some thoughts here and there.

Finding energy. Grandpa walked several miles everyday. When my grandmother was more mobile, she used to take us on walks, too, in addition to using her stationary bike. They didn’t think about what exercise class to take up. They just DID. As I mentioned earlier with the chores, we simply need to just start DOING again.

When we have time and simply think “I should do yoga…” or “I should go for a walk”…that’s the time to put off something for half an hour to simply DO IT. Not to steal Nike’s tagline, but it’s actually a pretty good one.

Oh, and if we wait for the kids to be older to do this stuff, we’ll never have energy. So, there’s a good chance they’ll be coming along for the ride or Dave and I will be playing “your turn!” to get some sort of movement in. We’re already starting to try some at-home family yoga. Not the best of workouts, but pretty fun.

Family priorities. Putting family – and family FUN – first is huge for us this year. I look at my high school students and wonder how much time they spend willingly hanging out with their parents. I whisper to myself that I truly hope our kids will WANT to spend time with us. But, the reality is that Dave and I don’t seem to have as much time for the kids right now as we’d like. In fact, Harper’s go-to playtime song is one she made up herself called “Grown-Ups Get Busy Sometimes.” As you can imagine, that’s heartbreaking to think about.

So, just as much as we realize, one day, our kids may not want to spend as much time with us, we have to realize how it looks when we find ourselves distracted by the day’s events or dinner making or chores. We must try harder, with family nights and game nights and fun excursions. And while those things, like folding clothes and meal time prep, may be imperative, perhaps bringing the kids into the activity will have a twofold effect; 1) increased independence for the kids and 2) making family memories together.

I’m rather certain that it was a general expectation that families share the load back in the day. I know that my grandfather worked to help his family afford the necessities when he was old enough to do so, and my mother and her siblings helped out on the farm. So, it’s not too much to get these littles involved in some simple daily tasks.

Self care and daily discomforts. While, again, a catchy phrase like “self care” might not have been the thought behind it, but something as simple as ensuring you have the nicest of socks and shoes was a lesson my grandfather brought home from the Marines (and all his time spent marching the islands of the Pacific). I can’t fathom the “daily discomforts” he saw, right down to the near-fatal illness he contracted, so when I say that I’m going to try to do something outside my comfort zone everyday (generally that’s good for me – that’s where self care comes in), I should be reminded that no discomfort is really too great for me to handle.

Perspective is a wonderful thing.

I’ll stop by with some more thoughts on how to live a modern 1930s life later, but for now just thought I’d share how they seem to be a running thread through my New Year goals.

I’d love to hear if any of you have noticed a harkening to the past in your 21st century life. Let’s chat in the comments, or follow me at Instagram or Facebook @megactsout to strike up a conversation.