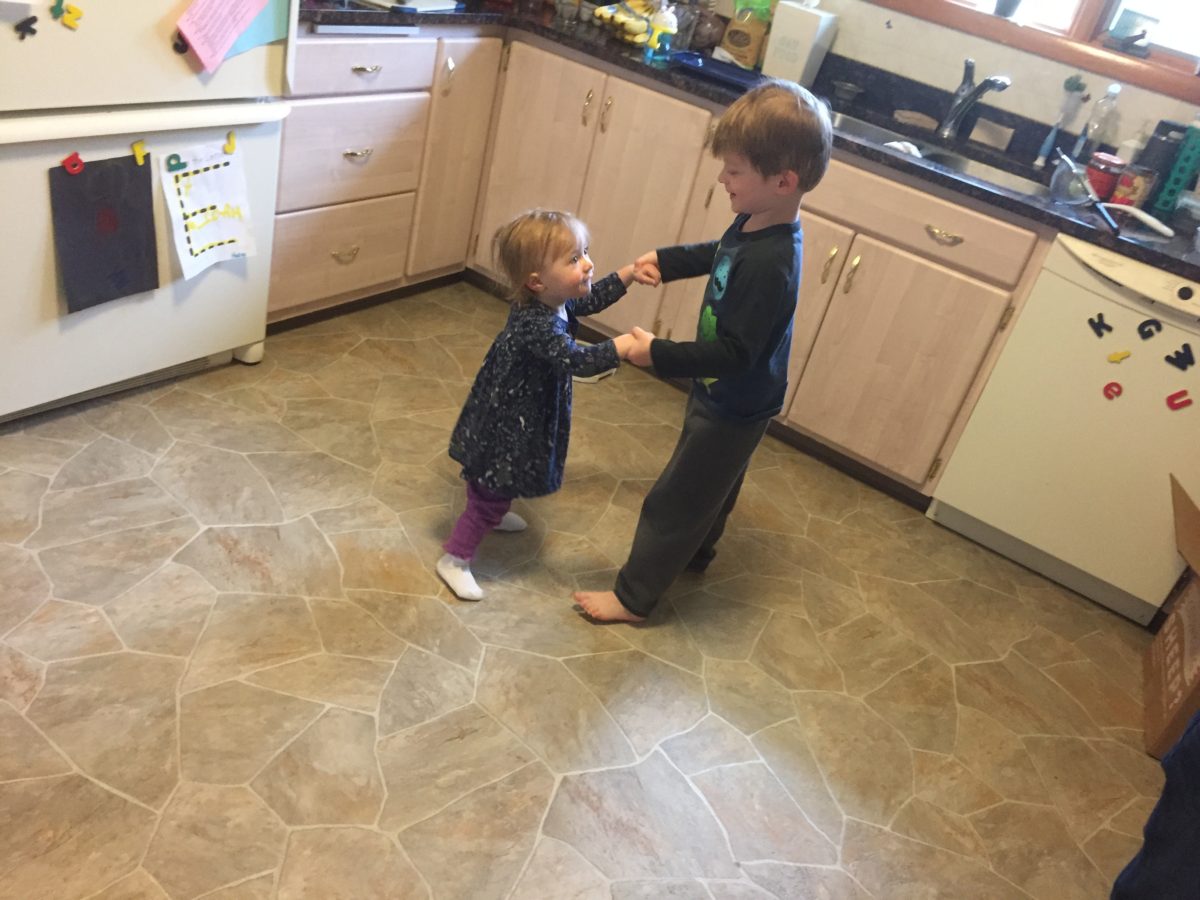 It’s only May (albeit late May). We still have another month before summer officially hits our house. Recently, I found myself in the midst of a crazy schedule of house duties – Dave was mowing the lawn (which, at our new house after a week+ of non-stop rain, is a monumental task) so I was playing with the kids, cooking, and throwing them in the tub for a quick early bath so that Dave could rinse off after his chores. Even amid this chaotic scene, I found myself full of joy and appreciation, and truly looking forward to the time ahead this summer with them.

These are crazy ages. 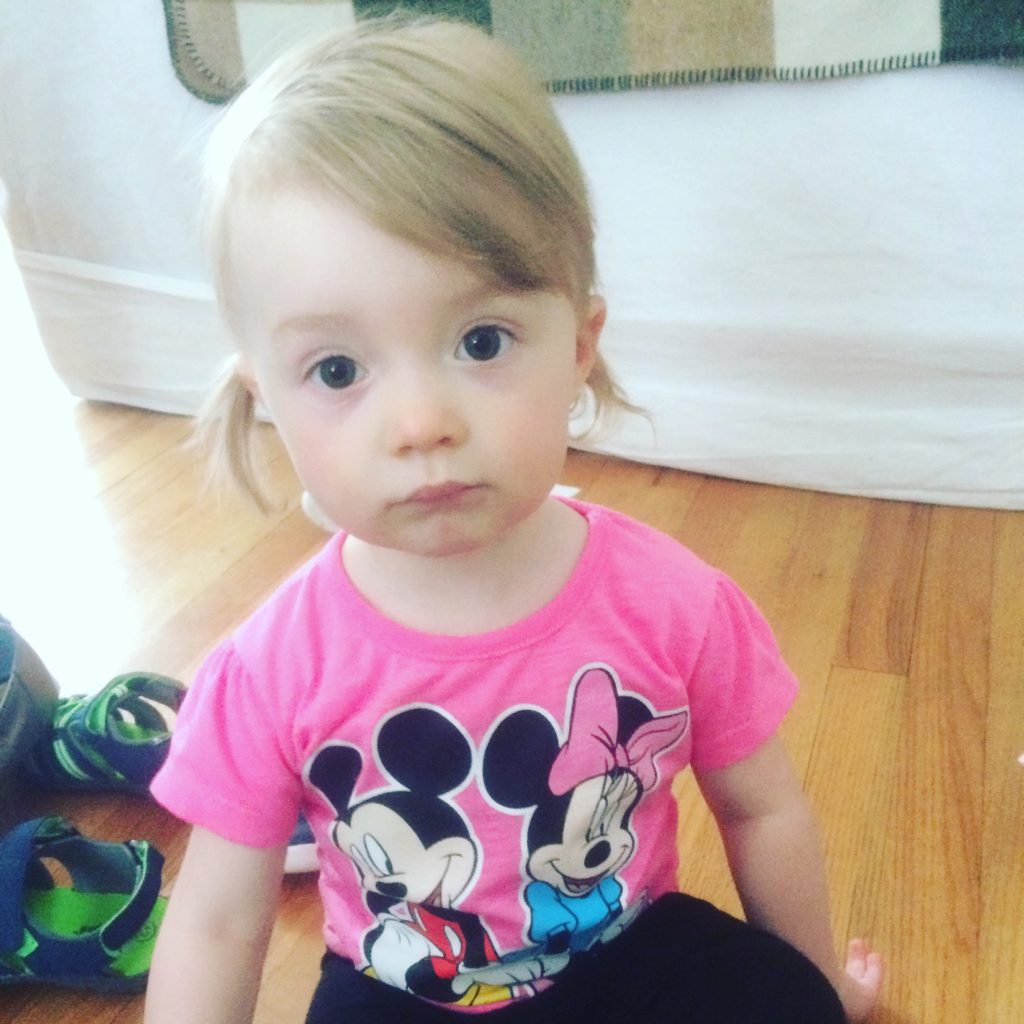 Harper’s officially a year and a half. She’s still a little peanut, but her personality (when she pushes the “stranger danger” shyness aside) is beyond unforgettable. When she runs, she puts both her hands behind her back (either she’s a superhero or it cuts down on friction, whatev). She’s STUBBORNNESS personified – ahem, like her mom – but I’m learning that if you give her a task she’s *sometimes* easily diverted. Just until recently, she hadn’t taken to drinking regular milk yet but recently seemed to give up her bottle of pumped milk a day (woohoo, although I’m somehow nervous not lugging my pump in and out of work!) but she still nurses a couple times a night. She pets and snuggles her kitties with a relatively gentle touch. She thinks she’s older and demands to be treated as such. She’s part fashion plate, part Punky Brewster; possibly a tomboy. She adores me (for some strange reason), sometimes throws Dave a bone with a rare hug, and always dotes on her big brother. 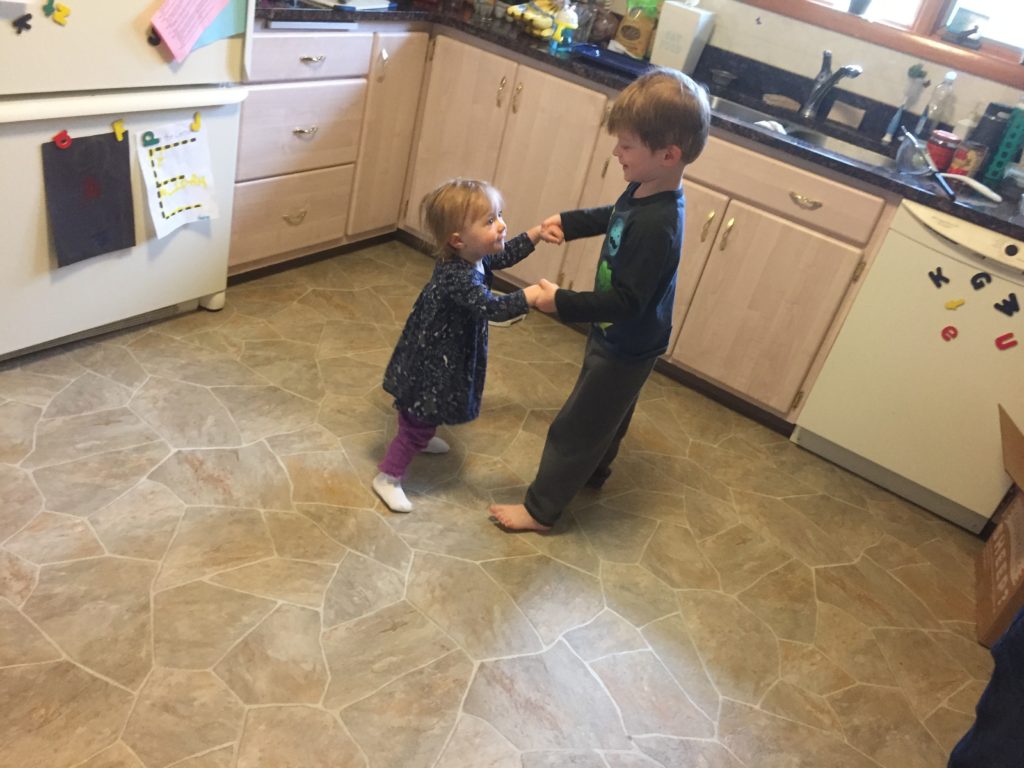 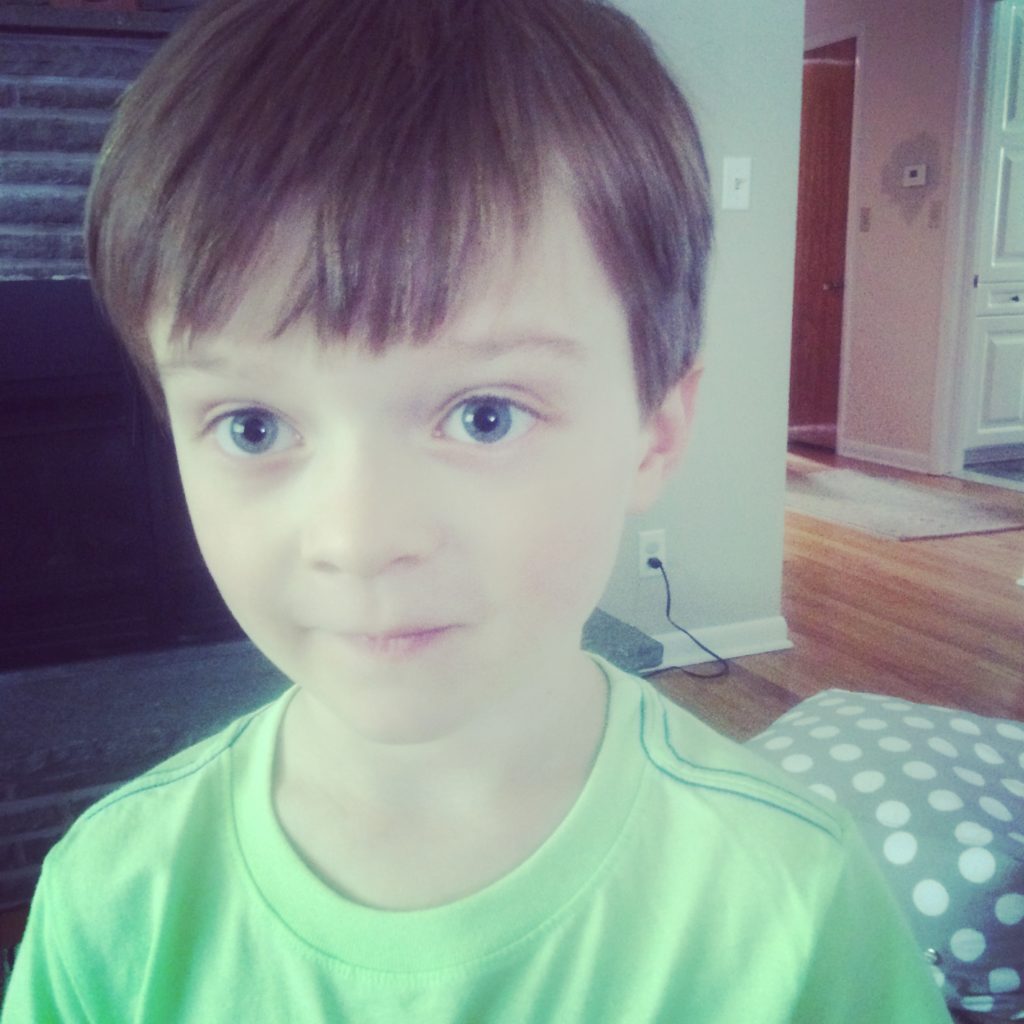 Hadley’s going to be 5 in less than 2 months, guys. Let me get my bearings on that one. *sniff, sniff* Watching the passage of time through his demeanor and growth – still with the occasional behavior slip or meltdown, but noticeably fewer for the most part – is humbling. He’s as kind as they come with a huge heart that gets hurt when kids, well, are kids. He uses big (like, big…adult big) words. He’s inquisitive and precocious – but not overtly annoying. He has a hard time controlling himself at times but is, at heart, a people-pleaser. When he’s about to get hurt, he’s already apologizing before he hits the ground. Poor kid comes by it honestly from both parents.

After teaching hundreds of kids over the years (the perks of teaching library – you meet ALL THE KIDS), I had reached a disciplinary style that, I felt, saw the uniqueness in all the children but tried to accept the fact that they should all still be held accountable for their actions and choices. Strict, I would say, which is something often lacking in the home, but with a touch of trust and humor. So, I took this home to Hadley. 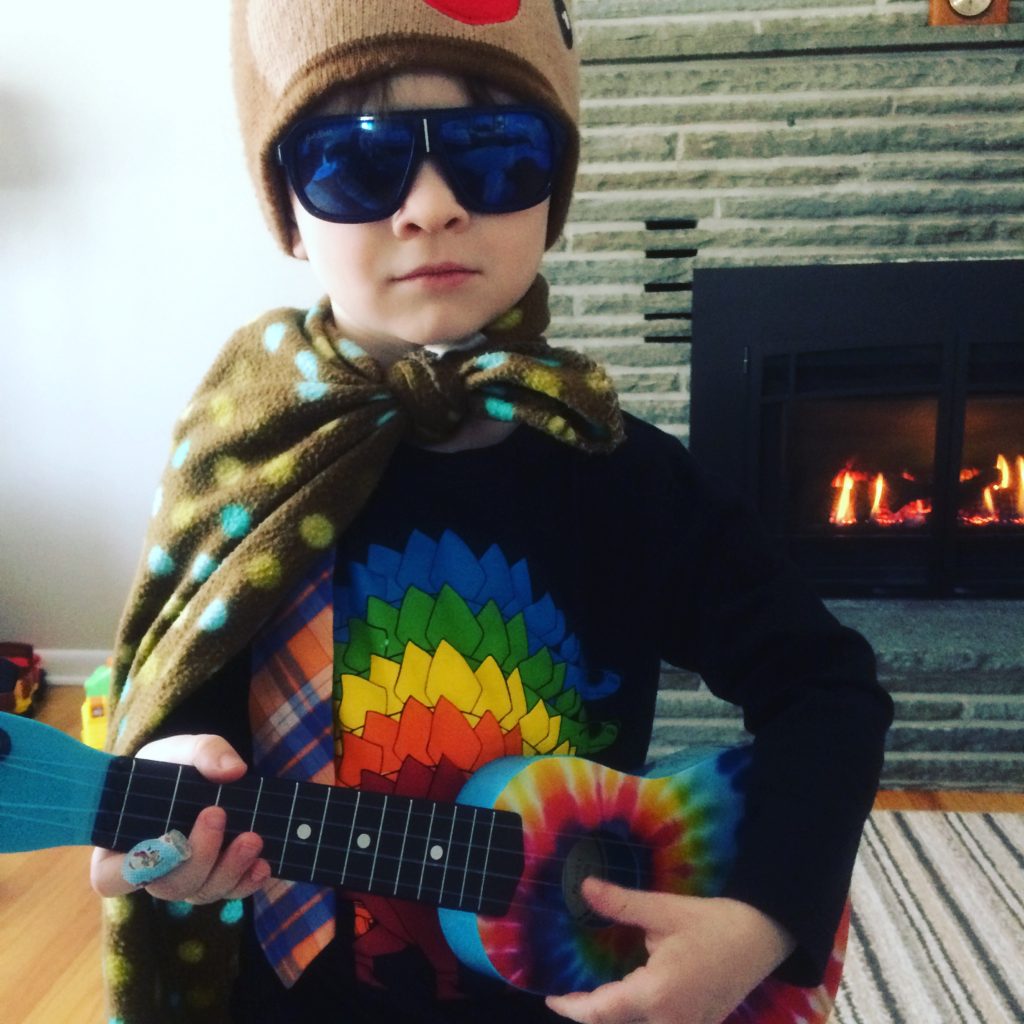 Now that preschool teachers and the teachers who have met him for kindergarten have stated and reiterated that, yup, there’s something different about him, my thinking’s shifting a bit. There are some areas that still drive me crazy (“pinch the pencil, bud” and God help you if you hand him an ice cream cone to eat solo), but I’m starting to accept that he deserves more from me, particularly nurturing. I won’t say “us” here because my husband has always been the most sweet, supportive father on the planet.

Let’s just say that I’ve seen what kindness does to him. It opens him up like a flower. He’s more attentive and eager to please when he’s not going to be struck down (figuratively!!!) for doing something wrong. It’s amazing, and I’m ashamed that I wasn’t able to find this willingness to pick only the important battles and give him more breathing room far sooner.

As far as he’s grown and developed, it’s clear that we ALL can find some growth and new awareness at any age. Even parents. (Okay, ESPECIALLY parents.)

I’d like to be able to give them a summer that’s all those things: fun, goofy, brain-building, amazing…and, yes, simple (since, y’know, that whole “relaxation” thing sounds great to my pregnant mind). In the vein of simplicity, I’ve turned to general ideas that we can kind of “fill in the blanks” later to give us a guide of fun summer activities without the self-imposed “we have to do #allthethings” stress.

– A science museum – Last year, we built our entire getaway on heading to a kid-friendly, interactive museum and while the museum itself was amazing, the rest of the trip kinda wasn’t. So, this year I’m eyeing a spot much more local to us and even got to scope it out on a recent field trip at school. I think Hadman will LOVE it and there are even some cool things for Harper to mess around with.

– Zoos! – Any chance to fit in a trip to the zoo, whether it’s our favorite local spot or a larger one while traveling, is a great idea for our kiddos. They LOVE animals, so a day at a zoo is ideal, and now that Hadley’s much more into coloring and drawing, we can base some simple activities off of what he sees. We also want to start chatting with the kids (well, Hadman) about animal conservation and the environment more, so hopefully this will be a good jumping off point. Wild Kratts helps give a bit of a foundation, but seeing the animals brings it home.

– Head outside – This could mean a bunch of things, from going on more walks to actually enjoying our backyard more to finding spots while vacationing that we can get some fresh air, going to the playground to eating in the backyard as a family. I like to keep things open – again, simple and less stress – so it all depends on schedule and weather.

– Fresh, easy meals – Speaking of eating outside, our family has gotten into a rut. While we still don’t eat certain things (fast food comes to mind), we’ve been relying on restaurants and local pizza joints more than our fair share ever since the move (and if I’m honest, it’s been about for the past year or so). I’m hoping to push fruit and veggie snacks more this summer (on EVERYONE, not just the kiddos) and some real food meals. I’ve started this already, but with the summer farmers’ markets coming up, I’m excited to see what goodies they have to offer. * Our ultimate goal is to reach an 80/20 ratio of good, real-food choices to “real world/real life” options (ie a pizza or meal out from time to time).

Now, if only Harper wasn’t showing signs of a berry allergy. Grr.

– Treats are OK! – Don’t get me wrong with my last point – we’ll still savor our ice cream and popsicles. I’m also hoping to avoid getting too hyped up about how messy they tend to be. 😉 We also have a new fire pit, so you KNOW s’mores are in the mix. (Now, if only we could find some organic marshmallows…)

– Getting away. – This is a tough one to figure out for some reason. We were hoping to get away for a quiet, as-relaxing-as-possible-with-two-young-kids vacation but can’t settle on a where and when. We also make a trip to our “it’s tradition!” spots, like Western Mass and Old Forge, so I just don’t know. Gah. This may just be the year we fly by the seat of our pants.

So, there we are! I have a HUGE job to get inventory done and ALL of the books packed away for construction this summer, so I can’t wish the days away…but let’s just say I’ll be glad to have it all done and behind me to enjoy these munchkins (and my super cool husband, of course) this summer.

Anyone have some awesome plans they want to share? Or suggestions for a fun-yet-peaceful trip/vacation that won’t break the bank? I’d love to hear in the comments!

4 thoughts on “With Kids Like These, How Can Summer NOT Be Fun?”