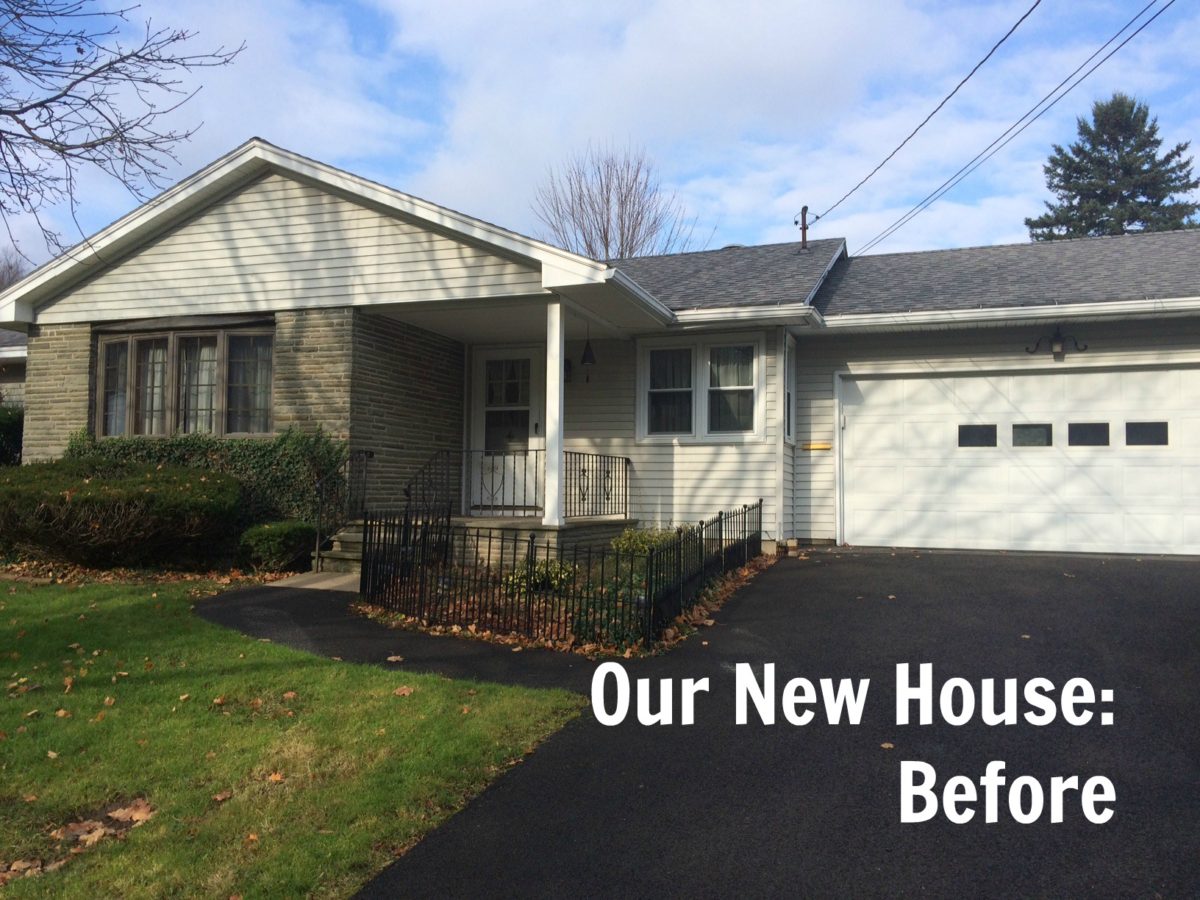 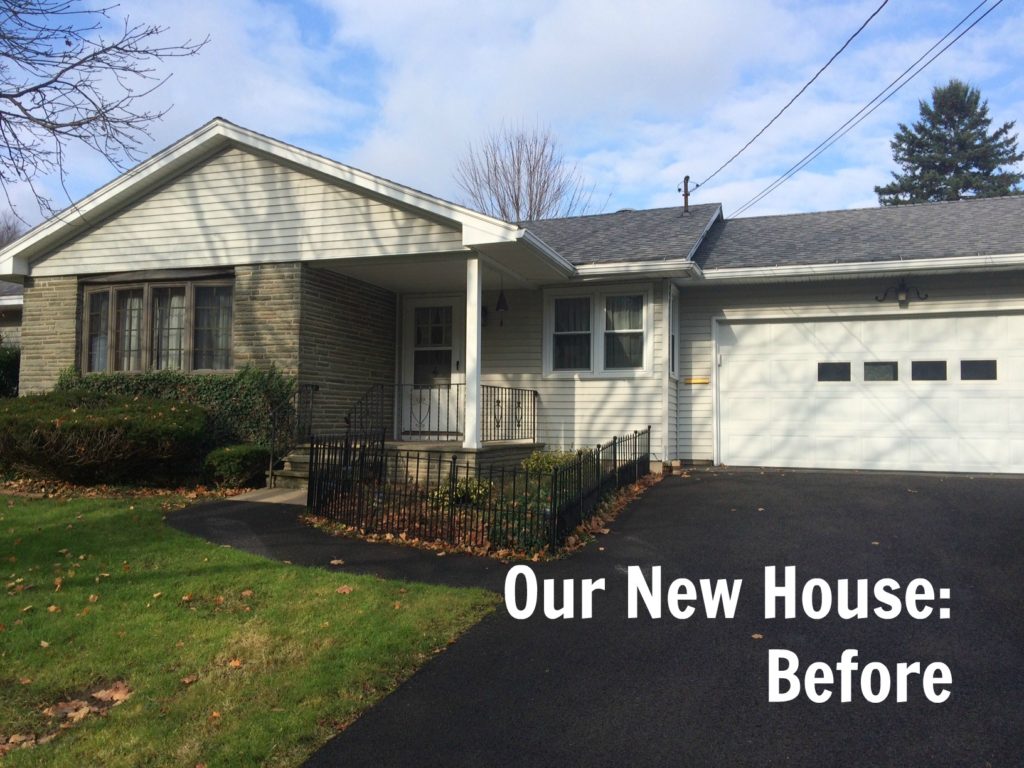 Hey, guys! Today I’m picking up where I left off in my last post about our new home. Be sure to check it out to hear more overall details about the place and our plans for it.

Okay! On to the bedrooms. 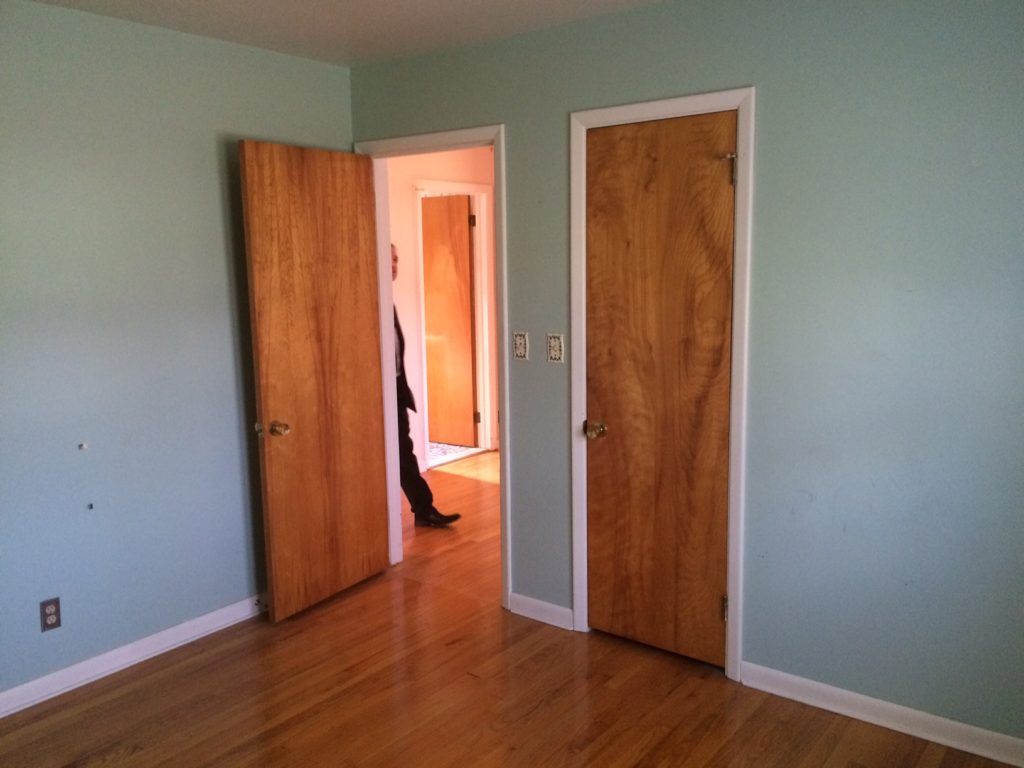 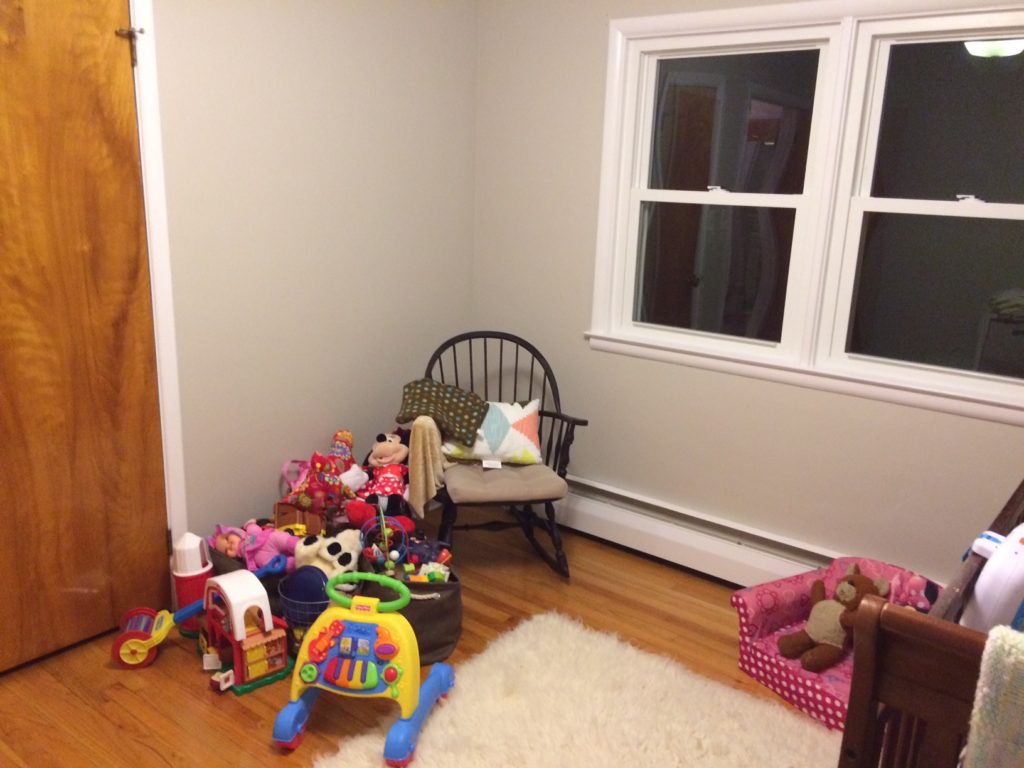 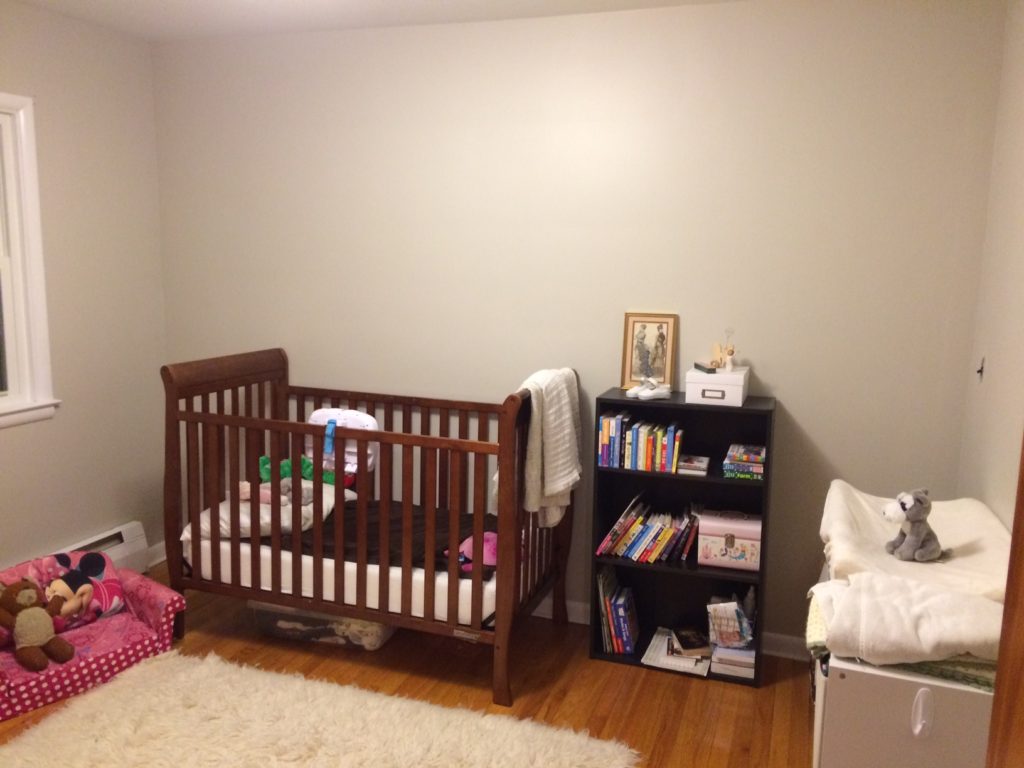 The first space we painted – a gorgeous light tan/gray (depends on the light) with white trim – and I still haven’t made it feel like a complete room yet. Sure, Harper’s furniture and shaggy faux fur carpet are in there, but we haven’t put anything fun on the walls or done anything to make it feel particularly “her.” “Her”, by the way, seems to be no-nonsense(!) but fun and colorful. Her clothes tend to have a comfortable vibe (comfort always comes first, especially with the little adventurer that she’s become) with small, bohemian florals and neutrals or bright, modern colors. Kid’s hip and she knows what she likes. I love her for that.

Now, if she’d only USE her crib more often. :-\ Nighttimes are often spent traipsing back and forth between her room and ours and, admittedly, she’s become a bit of an accidental co-sleeper.

TO DO:
– Organize – Her closet is still full of spillover boxes and toys and…oh, just crap. Plus, ALL the toys in the entire house need a good purging. Christmastime left us overwhelmed. Will it ever NOT do that?!
– Treat those windows. She needs some cordless blinds that will hopefully help block out the light, but I’d also like to hang something fun from them, too. It’s hard to figure out the challenges of both toddlerdom and baseboard heating.
– Decorate – The things we had to decorate her last room still haven’t found themselves to her walls, and I even have a couple of blank canvases (literally) awaiting a DIY artistic touch to create some additional wall art. It’s lower on the list than it should be right now, poor thing. 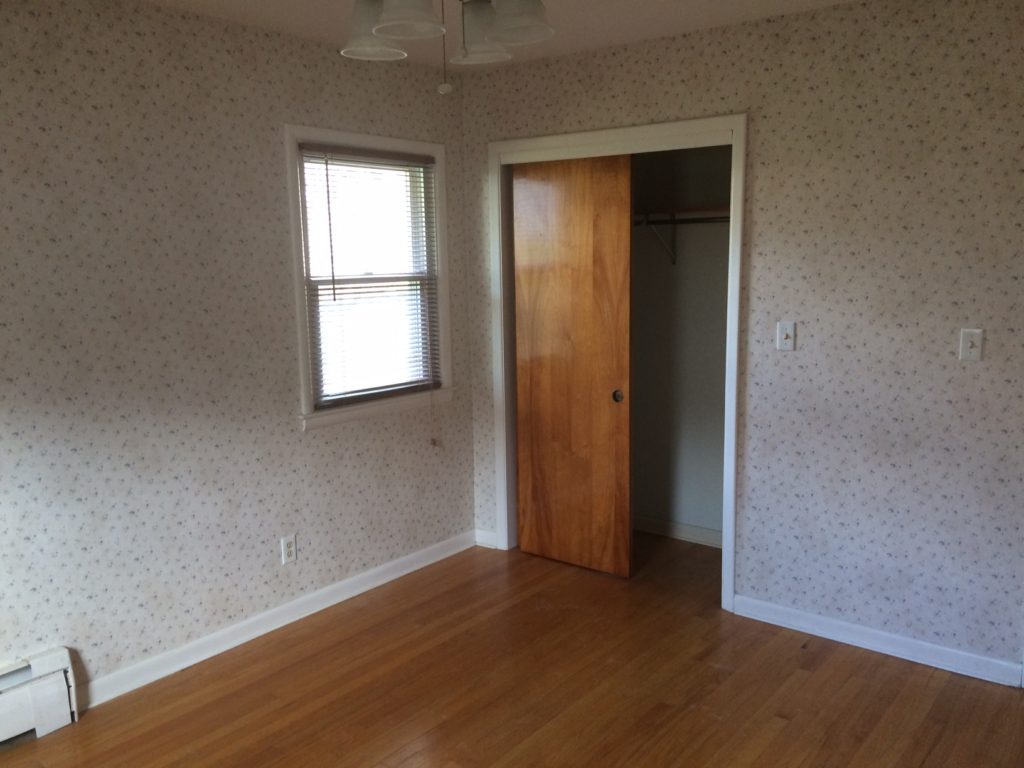 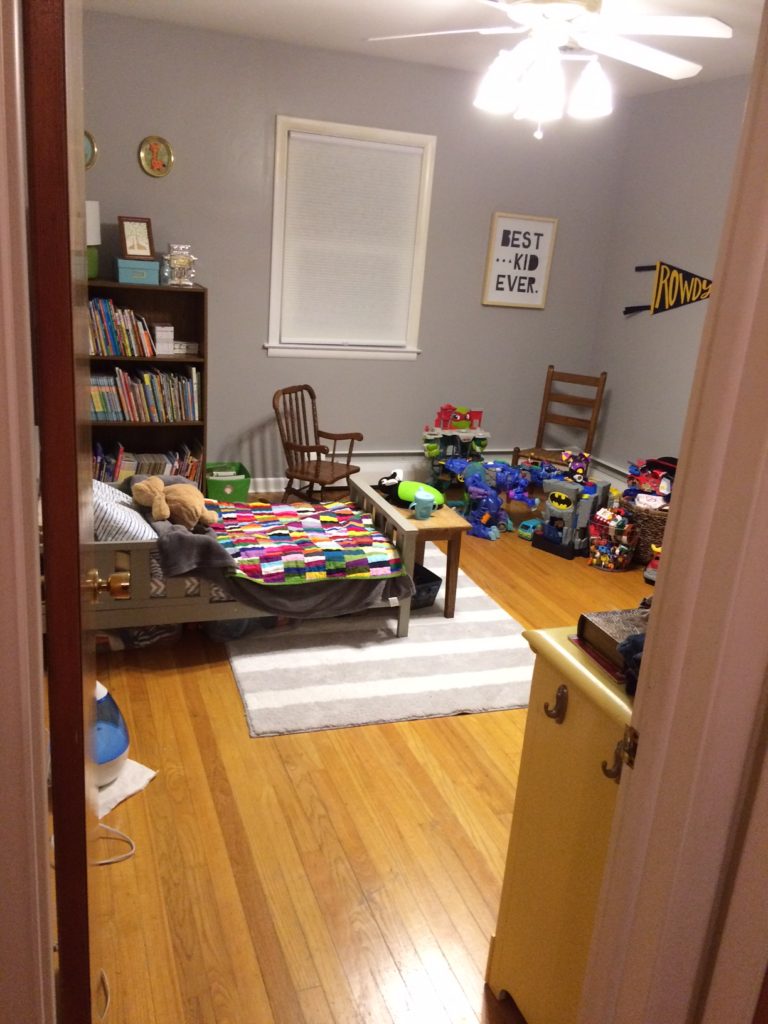 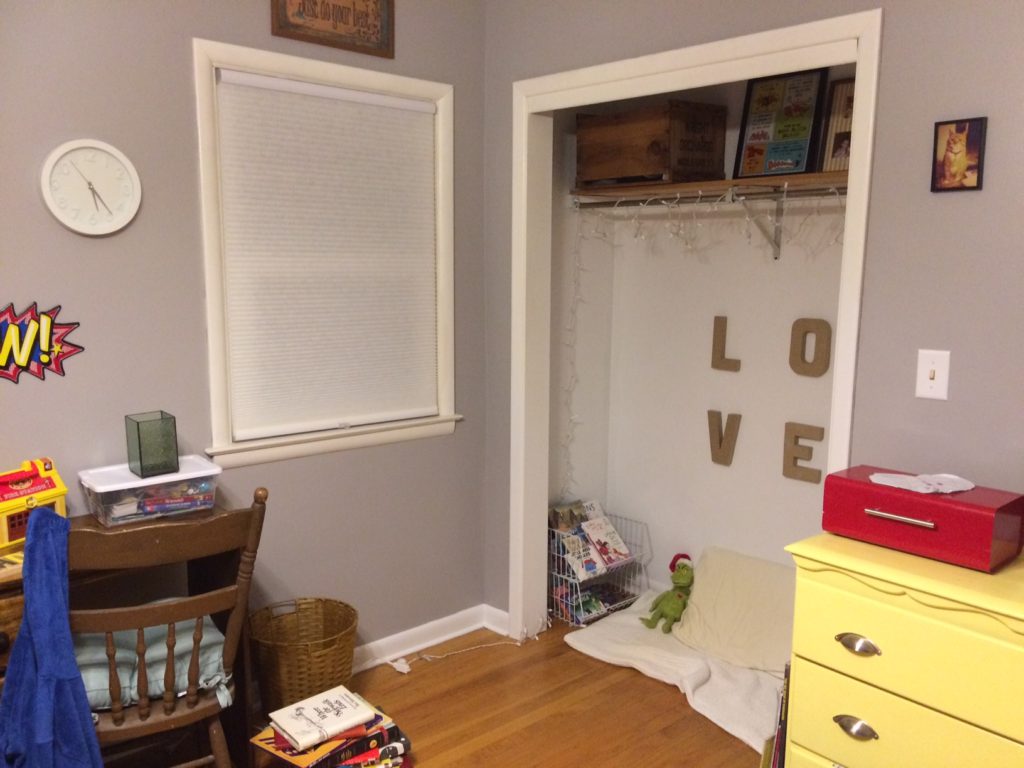 So far, this is the biggest transformation in the whole house. Dave’s parents worked SO hard taking down the wallpaper, scrubbing and scraping the walls, and painting.

I’ll be sharing a more in-depth post about this space soon, but suffice it to say, we’ve tried to pull his room together a bit to make it feel more like home. I know it’ll continue to evolve (as does our little man’s personality and interests), but for now I sent Dave out with both kids so that we could make it more fun – like him! – and homey. A couple of store-bought art finds, some old DIY art from his old room (that he loves), and some white Christmas lights and it’s one of my favorite rooms. It’ll do for now, at least. Oh, and Dave’s parents were kind enough to get and come install his blinds. Love the cordless ones!

TO DO:
– Finishing touches. We need to finish painting the trim around the windows, maybe add some additional window treatments layered on top of the blinds. 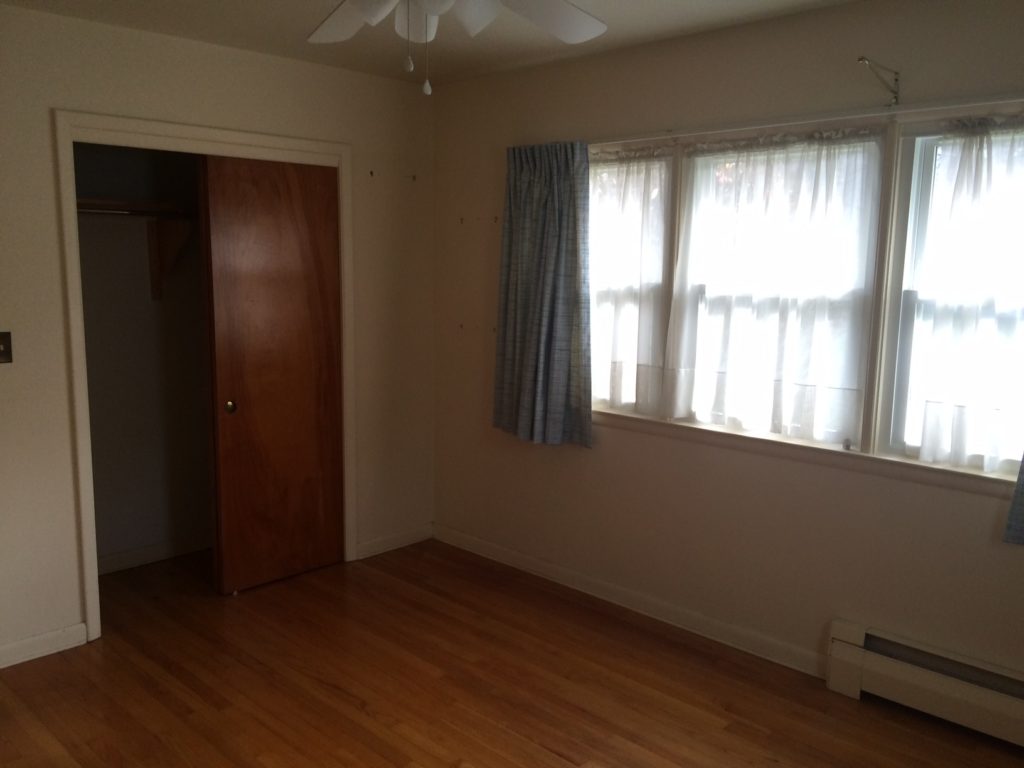 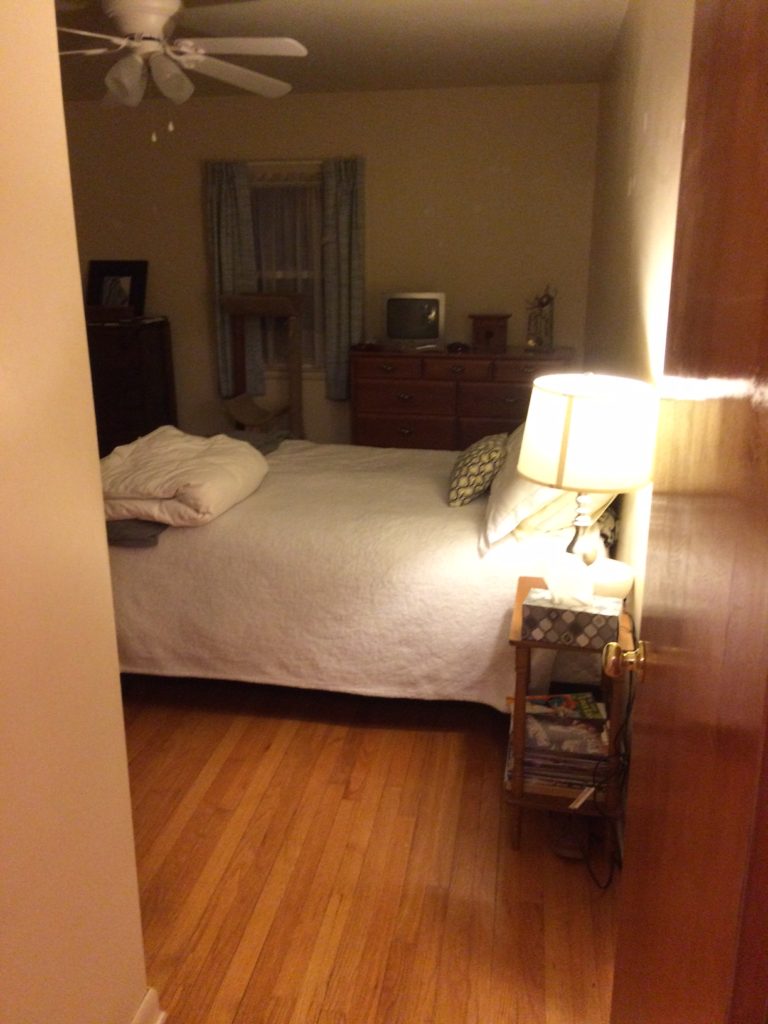 Our main priority was getting the kids’ rooms livable before moving in, and that was pretty much accomplished. Needless to say, this left our room in a less-than-desirable state. The walls and trim are institutional – I can’t even say what color they are. You know that oatmeal-manilla folder-ish color paper your elementary teachers would have you use as scrap paper? Kind of like that. And, of course, we didn’t paint the closet before throwing stuff in there. (But, at least we get to share a closet now! Dave used to get changed in Harper’s room since that’s where his closet was.)

We’re thinking of taking some bigger chances in this room. So far, all the other rooms we’ve painted have been a neutral greige of some sort. We’re considering doing something similar in our room plus an accent wall, but we’re also mulling just going for it and painting the whole space a deeper, moodier color. After all, it’s a larger room than we’re used to and it gets plenty of morning sunlight.

What would you guys do???

TO DO:
– Paint, paint, and paint s’more. Trim needs to be white. Closet needs to be freshened. Walls need, well, ANYTHING.
– Grown-up decor. We don’t actually have a headboard, so we’ve been discussing getting a new bed altogether. I’m considering a DIY option, but overall we need to get things to play nicely together. The hodgepodge of dressers and side tables needs to be adultified. Let’s just pretend that’s a word. 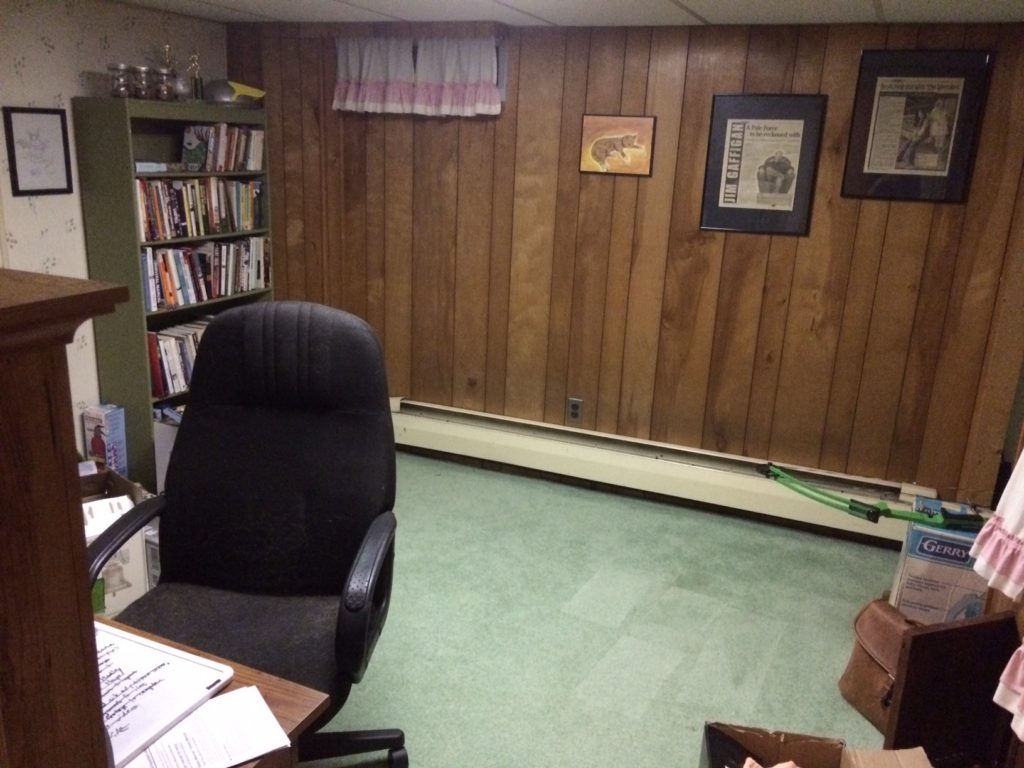 Yay, we have an office!!! This is actually Dave’s realm, mostly, because my writing is generally done wherever my lap is (ie the bed, the couch, the dining room). This space is in the half of the basement that’s “finished” (albeit super outdated) and will probably also house a futon or some sort of sleeping option for the rare guest or two.

TO DO:
– Paint the walls. I believe the walls in this room look like wallpaper but the design is actually printed right onto the wood paneling. Yep. Gross. So, after we get on top of the boxes and clutter in our basement “hallway” area, we’ll move this stuff around to try to paint this space. Hoping to find a color that will work with the ugly old but in-good-shape carpet but also any future flooring changes we may make, too.
– Make the rug work. This may entail layering another larger rug on top, I’m not sure. It all needs help, let’s say. 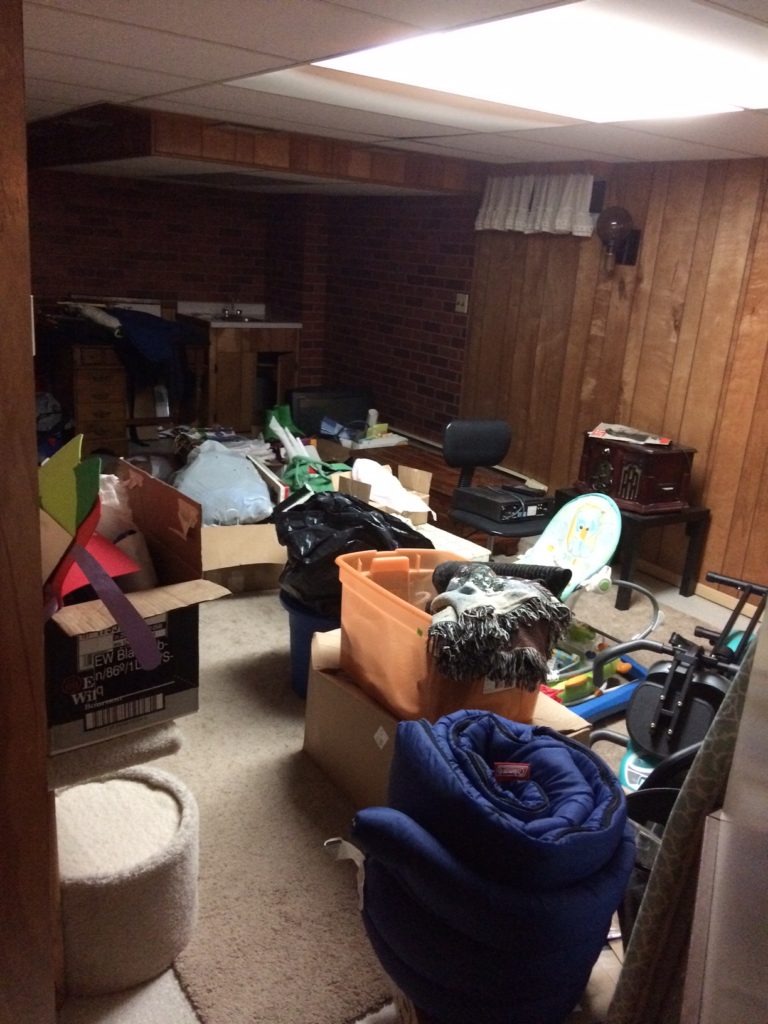 Ugh, that picture. It’s actually been picked up some since this was taken, but it’s still pretty rough. Let’s say that it’s got lots of potential.

This is a big, mismatched, totally ‘60s era space that still has a sink from a previous wetbar. I mean, can you say “swinging”? That said…it’s going to be our kids’ playroom!!!!

We’ve got several types of paneling AND faux brick that’s clearly more plastic than faux brick on the walls and an industrial linoleum floor, but the space is huge and I can’t wait to make it work. Again, I’m envisioning a fun, bright space with the kids’ fun in mind here with an accent on “modern.” ‘Cuz currently, it ain’t.

TO DO:
– Try painting…or replacing paneling, as needed. I’m totally cool having that one faux brick area, but if it doesn’t paint up well, I’m going to replace it. I also hope to replace at least one of the walls with a flatter material to create a chalkboard wall (ssssqqqquuuuuuuuueeeeeeeee!!!!).
– Furnishing and decorating. Since it’s such a LONG room and the floor can be cold given what it’s made of, we’ll need to have some throw rugs to make it a comfy, unified space. Also, if we can’t fit a couch/futon/daybed in the office, it’ll most likely end up here. Honestly, since the kids are so young and they need almost constant supervision, this will probably be where Dave or I perch while watching the kiddos destroy…er…I mean enjoy the space. 😉
– Organizing. I’m hoping to make this more of a Montessori-esque learning space, so I’d like to put any of the kids’ toys that they don’t use super regularly on the main floor down there and organize them into zones. Let’s just say we’re planning a dress-up zone (eventually to house a – wait for it – stage!), kitchen area, constructive counting/math/problem solving space, tent, and more.

No picture here…and kind of with good reason.

Bwahahaha! So. Get this. I had made an old “parsons” desk (kind of) back in the day that we ended up moving when Harper was born to make room in her new room. Long story short, it ended up in this room that’s attached to the end of the playroom – part bath, part laundry room, part cat potty room. I’m not sure if it became structurally unsound during the move or if one of our chunky kitties walked on it, but it’s currently laying halfway on the ground with two legs off.

But, wait, there’s more! Lately, Winston has been flexing his “curiosity killed the cat” side by getting himself stuck in the drop ceiling in the basement (he found it from the unfinished side). So, while I was down working in the unfinished area recently, I put him in the bathroom to keep him from a similar fate…only to accidentally lock. Him. In. I eventually took off the handle, then still had to find a way to open the door, but obviously freed him. Soooo…the handle needs fixing. Still. Ahem.

Again, no pics. It’s kind of self-explanatory, but, again, I’ll show pictures as I work in the space.

This is kind of the area that I worry about the least, but let’s just say that the purging will continue. I’m planning to have a garage sale (an actual one, in our awesomesauce garage!) when the weather warms up so that this space gets utilized in the best possible way. The same goes for the garage. The real “to do” here is just to organize and go through crap. Oh, and to buy a shed when the weather changes. That’ll help as far as the garage goes, too.


So, what do you guys think? Any ideas for any of the spaces? Any Pinterest boards you suggest I follow? I would love to hear any thoughts!