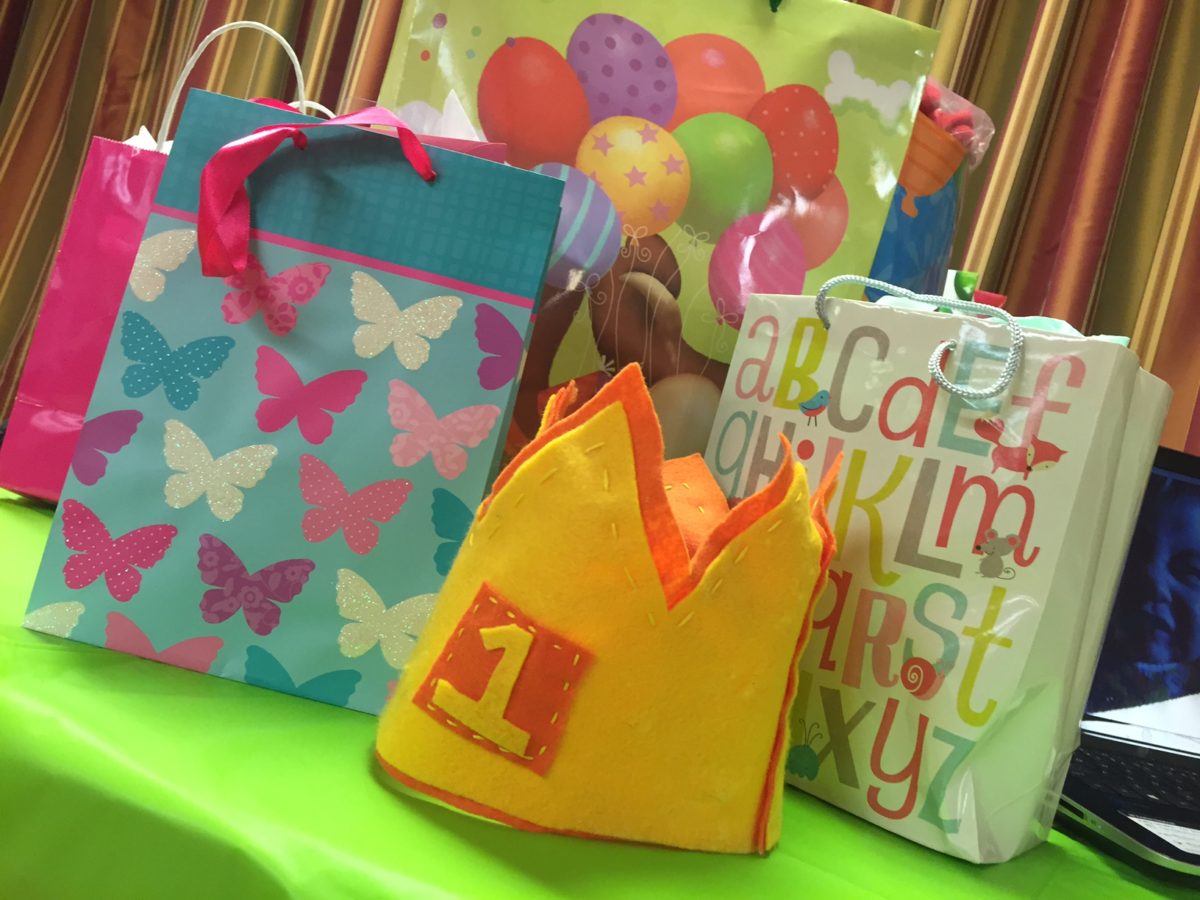 When Harper was first born, my husband bought her a nice plush “The Very Hungry Caterpillar” stuffed animal from the hospital’s gift shop. It was surprisingly inexpensive (we’d priced them at the Eric Carle Museum) and her eyes were immediately drawn to the bright green body and cute round red head. That moment is still seared in my mind over a year later. I’d literally been envisioning her first birthday shindig the entire year. Of course, with our move and everything going on, we knew it would be a challenge, but didn’t want to shirk her big day. After all, Hadman has had four amazing birthdays and counting (I’m already mentally prepping for his 5th <my GOD did I just write that?!> given some hints he’s dropped) and it wouldn’t be fair to do any less for her, right?

So, given the unknowns – we were supposed to close on the new house by her birthday, but things went awry and our old house was full of boxes – we figured out a Plan B quickly. My uncle (a local priest) was kind enough to let us use the basement of the church, so my mother and I went over earlier in the day to set some things up.

We didn’t get a million pictures (as usual), but I had created a large “hungry caterpillar” out of foam sheets to tape to the wall. I also printed out labels for the food, which I divided and conquered with the help of family. (These pics are more for our own memories than a Pinterest-worthy tipfest. That said, go ahead and use the ideas to help you create your own event!) 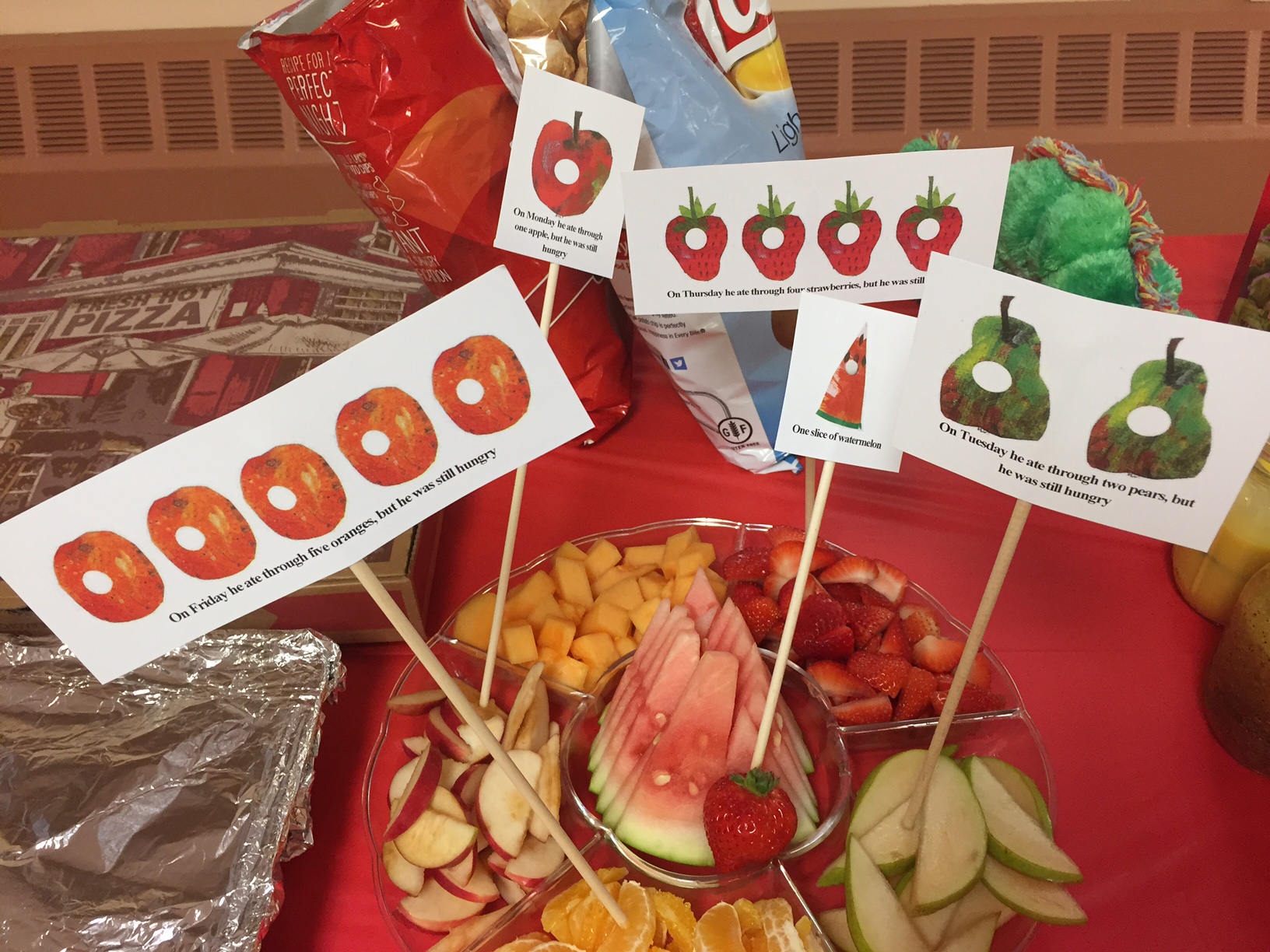 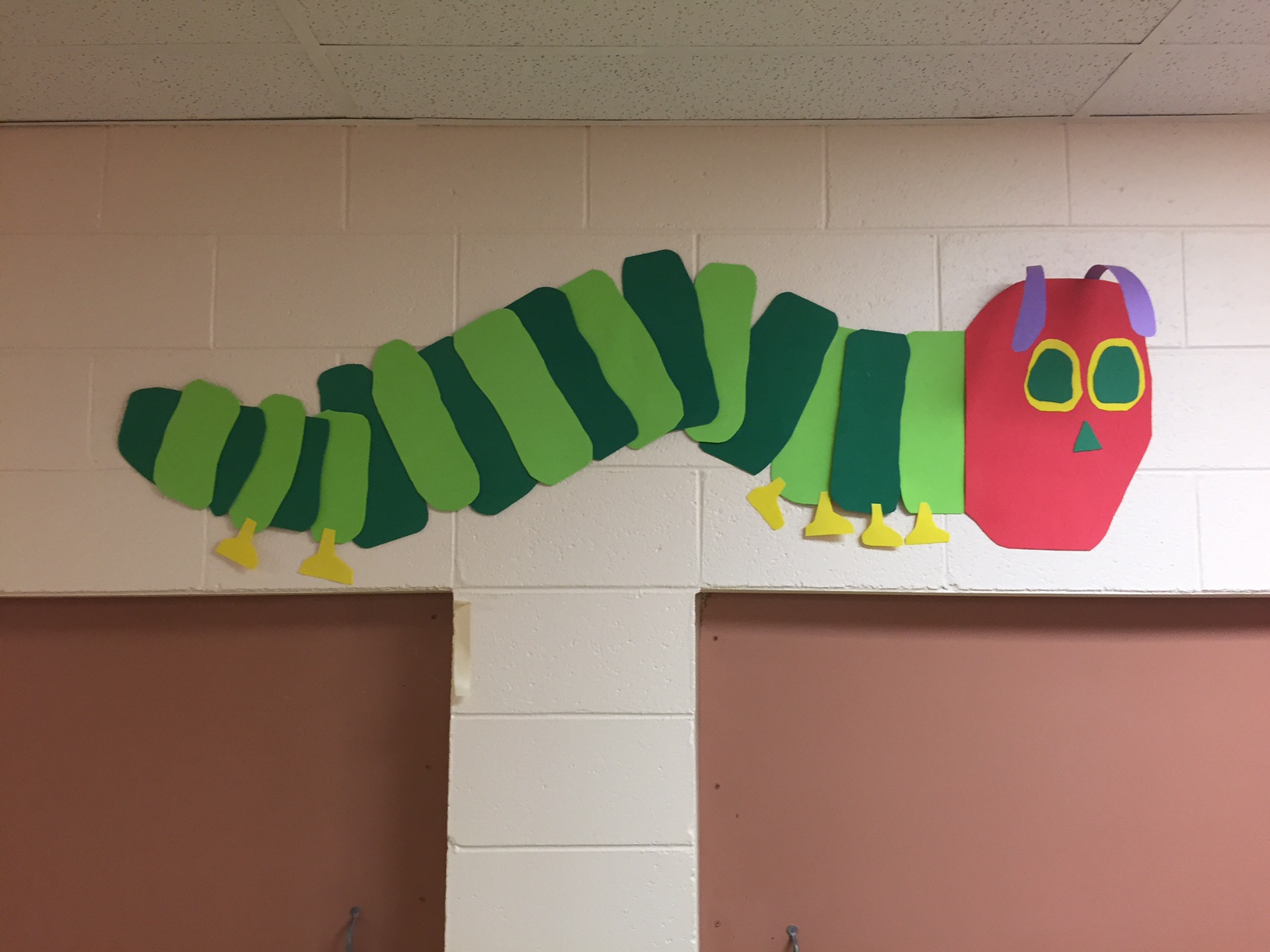 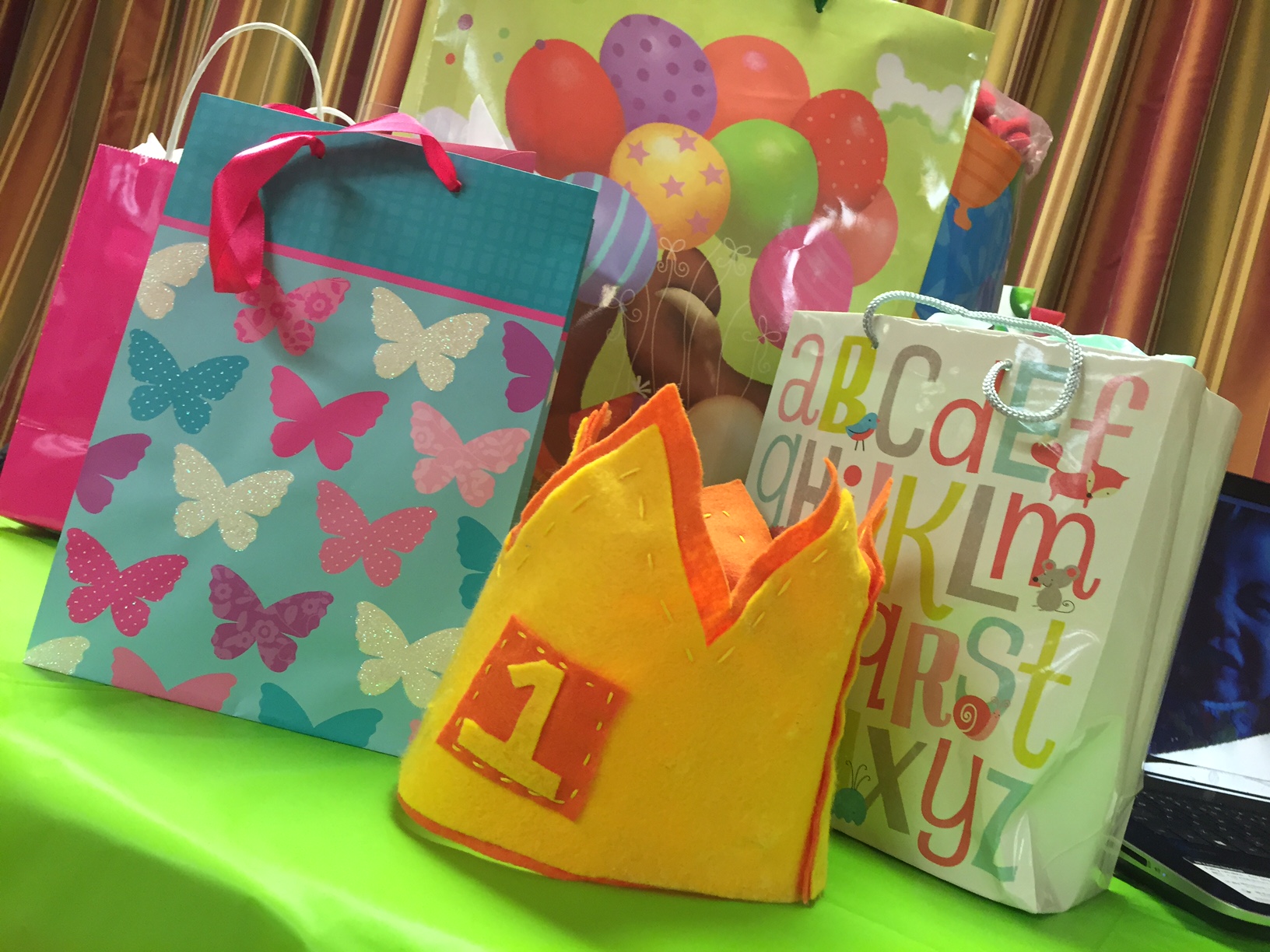 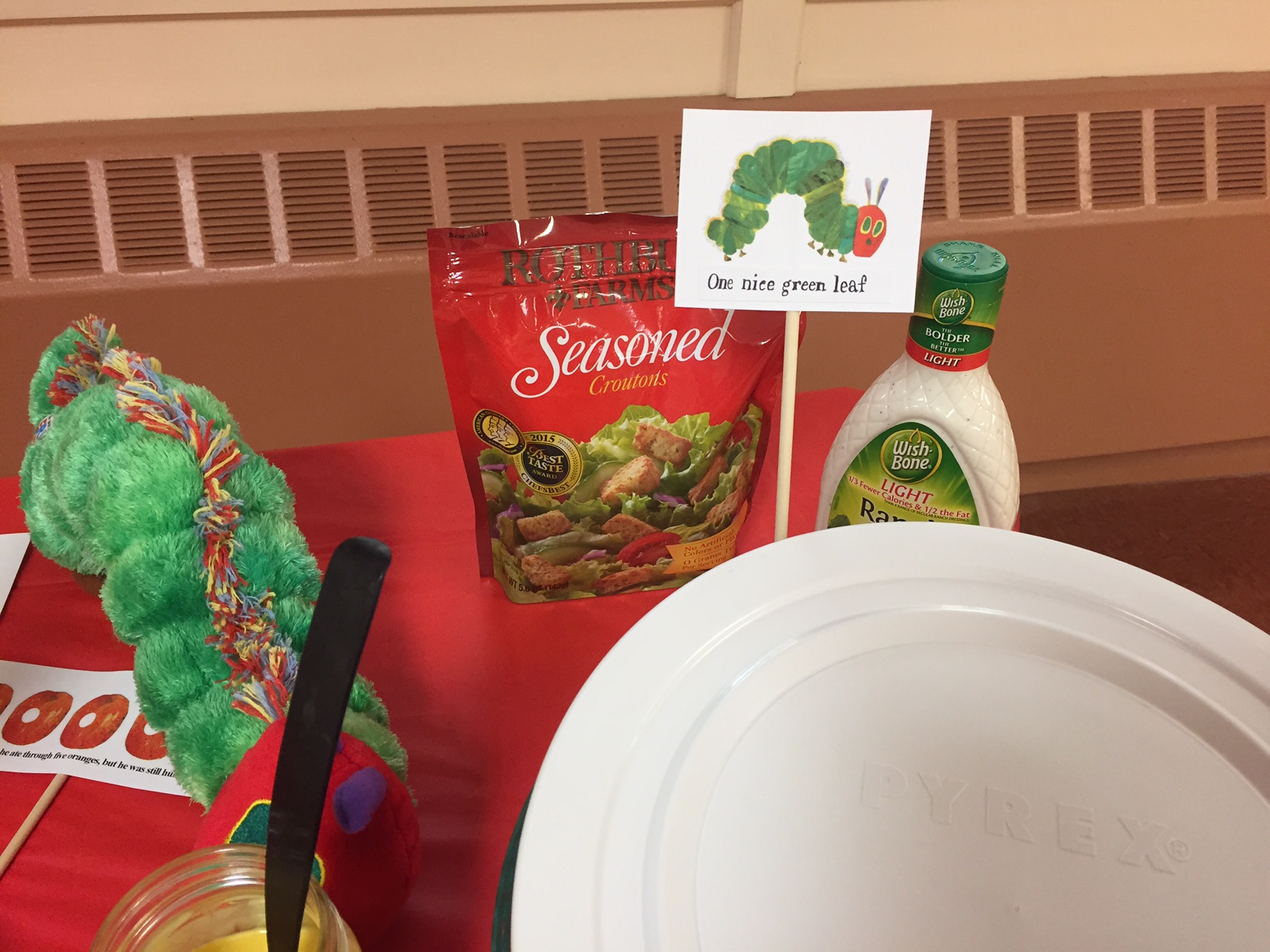 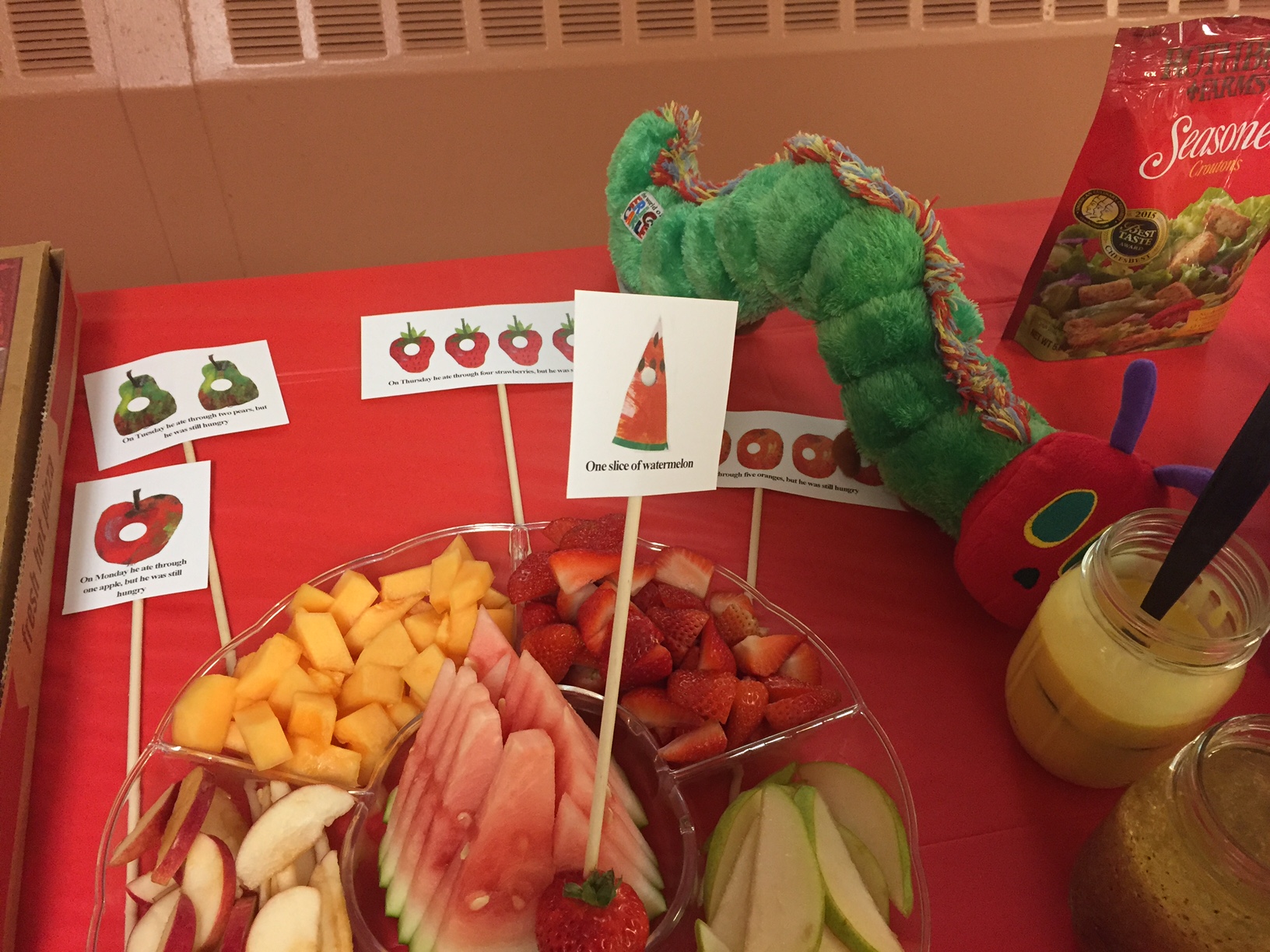 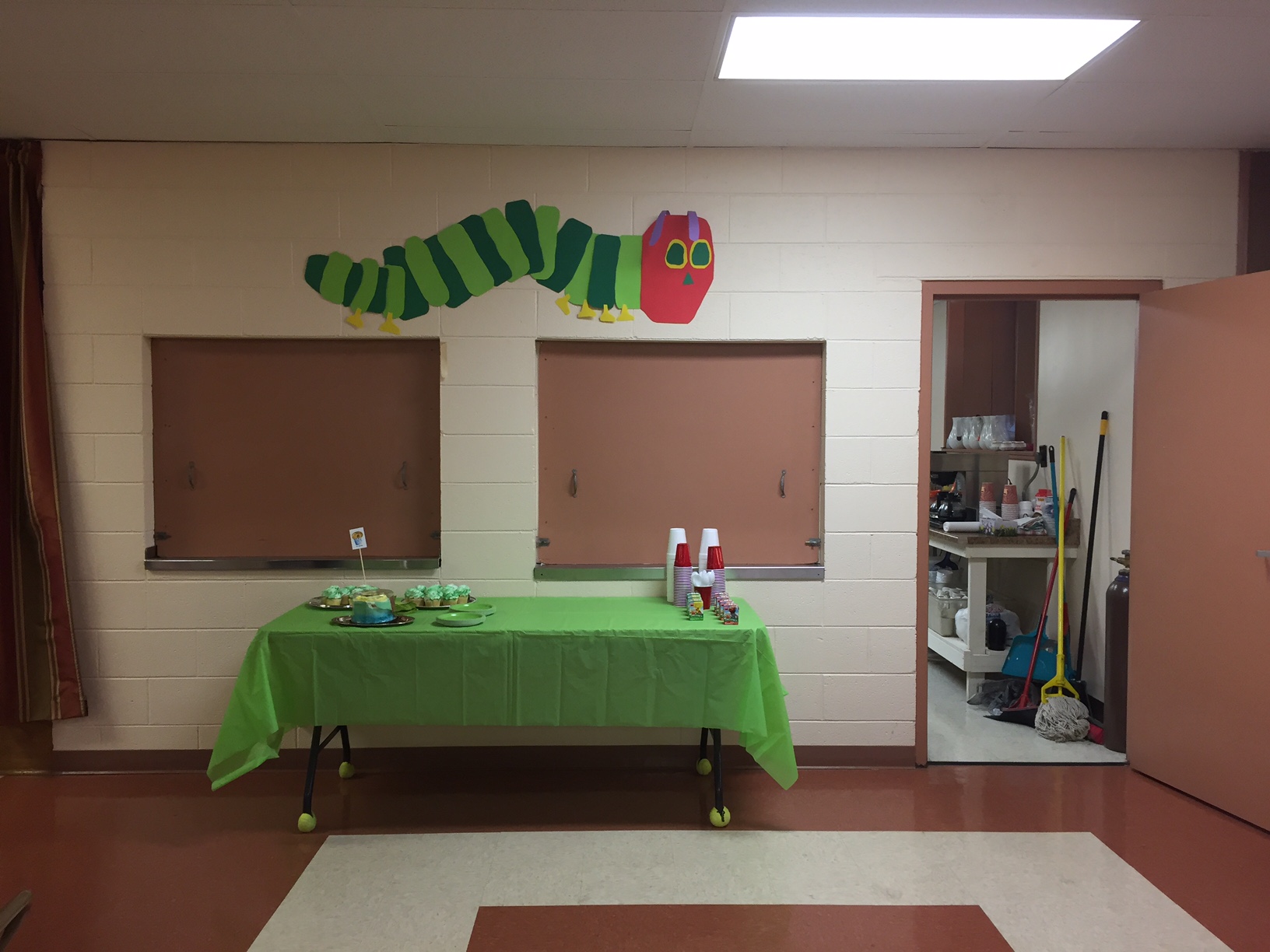 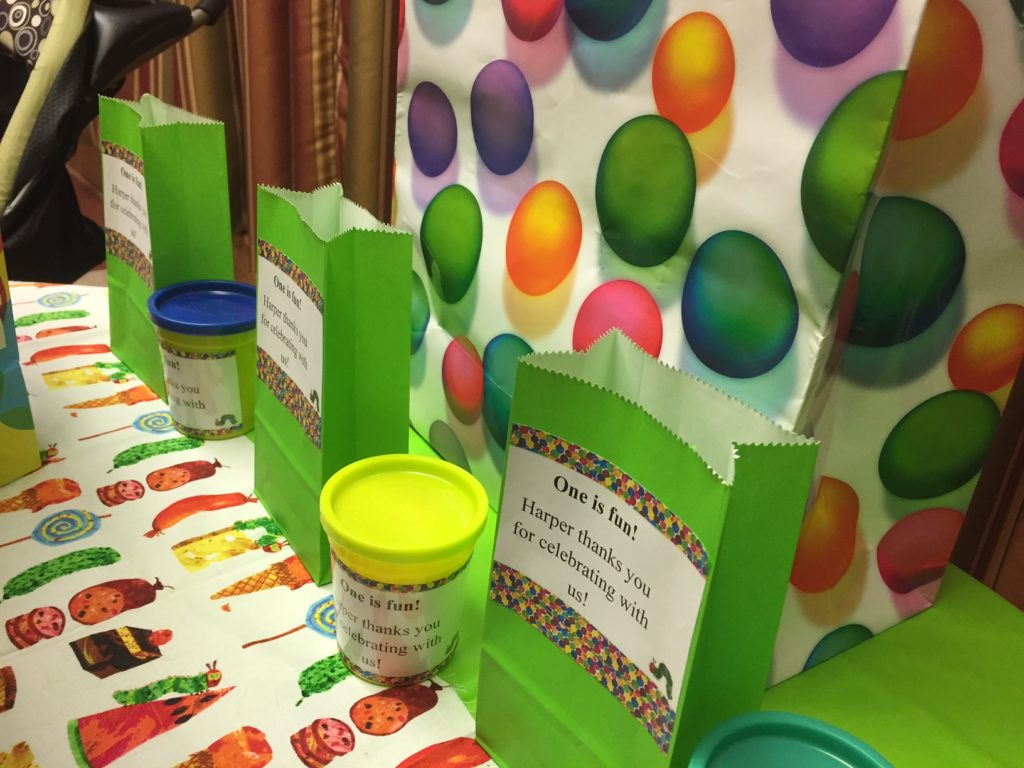 Unfortunately, there was a big hiccup. Both kids had been put down for early naps (which NEVER, EVER happens), so our son’s meal schedule was kind of off. Given the fact that he only had a donut for breakfast (rather than anything “substantial”) and didn’t sit down to eat anything else until around 2, he started to look a tad pale. When he said that one of the pickles on his plate didn’t taste right (another huge clue – they were fine, and he LOVES pickles) then stopped responding to questions, my mother and I scooped him up and ran to the car. Long story short, we think we need to make sure he has enough protein throughout the day in order to keep up with his super high metabolism (he’s also thinned out and had a growth spurt lately). My mother sat with him and he was bright and rosy by the time we got home, although sad that he couldn’t celebrate his sister’s special day.

Aside from my heart feeling like it was literally in two places, the party went perfectly. Harper behaved herself and truly enjoyed all the attention, the theme was fun and offered just enough color to help make things festive, and everyone (kids and adults included) seemed to have a great time. 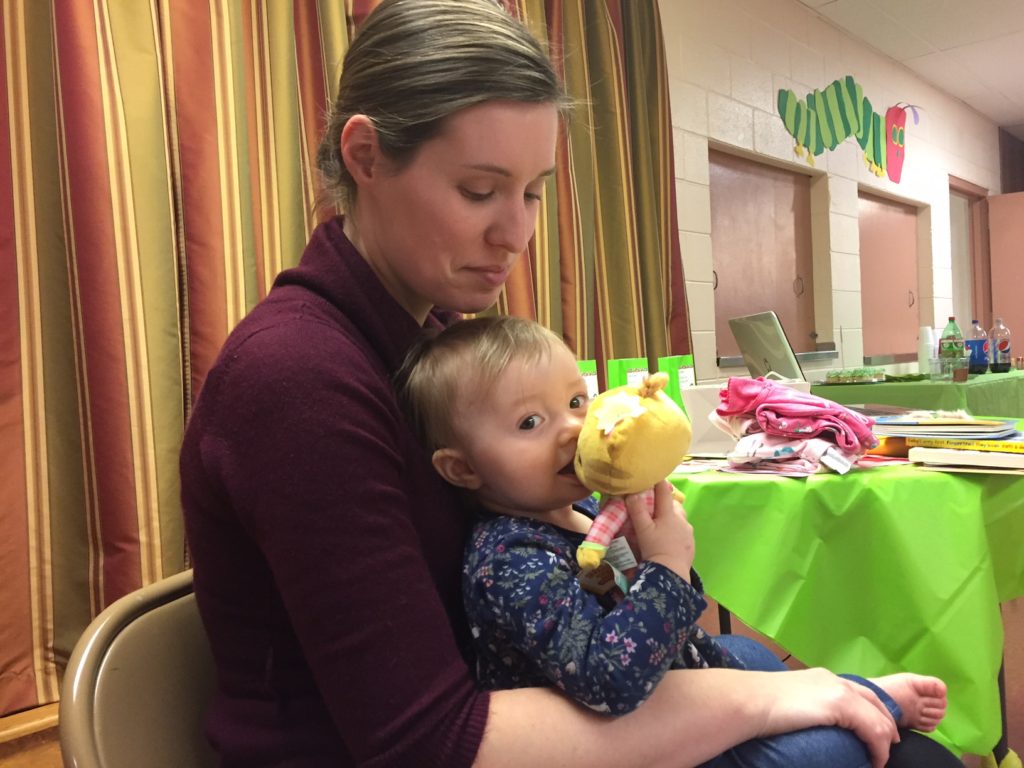 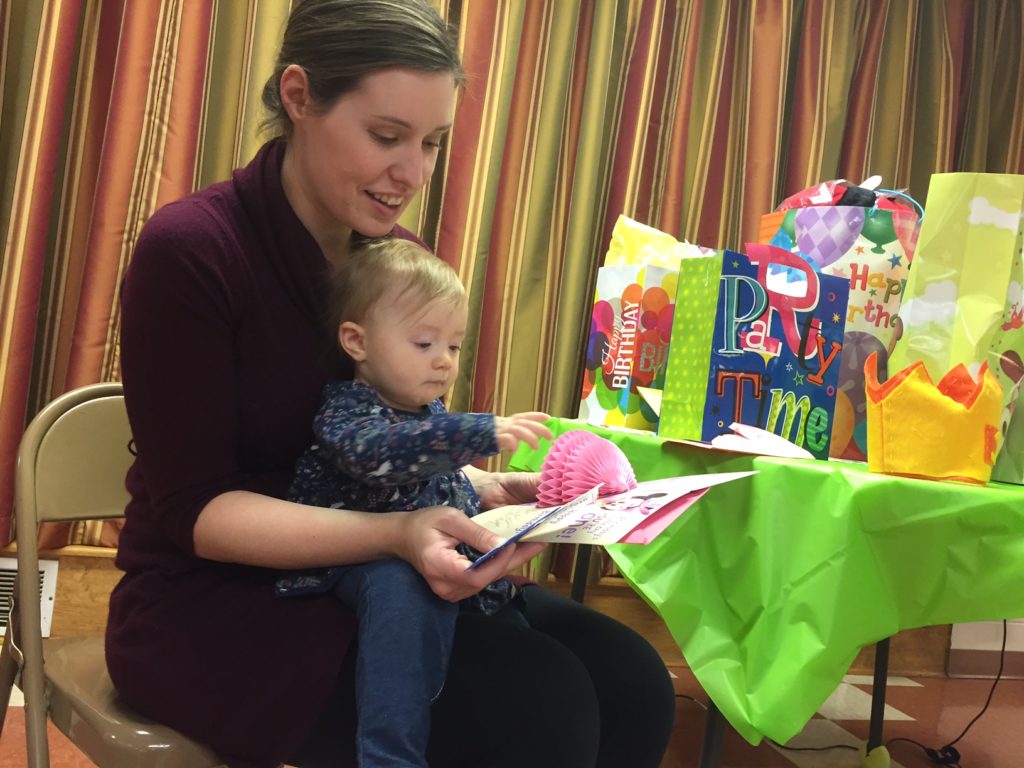 (This was after the smash cake. Y’know, a girl’s gotta embrace a nice, comfy jean.)

So, I thought I’d share exactly how we go about planning a simple birthday party that would be just as special and fun as her brother’s first (y’know, when I had more time to, like, make everything – including decorations and cake – from scratch) while still juggling all the balls of life.

Here are my best tips after doing this rodeo a few times now:

– Pick a theme. Believe me: a theme is your bestie. I get the eye roll sometimes for picking a theme, and I understand why. A theme makes it seem like you’re going overboard. But, actually, the focus helps me to mentally organize and NOT let things get out of control.

So, obviously, for Harper’s first we did a “Very Hungry Caterpillar” shindig. This gave us a super clear direction for the food (everything except the pizza is listed off on every page! Not that we made ALL that food, but it helps), a color scheme, and invitations.

Just think of what your little one’s favorite things are – and if they’re too young, even a simple color (like “Fun and Frilly” or “We’re Blushing” with soft pinks and tans) will help in your planning.

– Keep it simple. After picking a theme, brainstorm some ideas that go along with it. Then, pick your favorite, say, two or maaaaaybe three.

In our case, I printed off a few small signs out of cardstock to go with the food (On Monday, he ate one apple…), created a simple green and red caterpillar to hang on the wall, and worked on goodie bags for the handful of kids present (they contained a cool wind-up green caterpillar, cheap Play-Doh, crayons, and some candy). Super simple.

– Use colors more than trademarked stuff. Have you ever noticed how expensive all the character party stuff is?! It’s crazy town. And the worst part is that when you’re done with it, it’s hard to reuse (unless you keep a stash of mismatched stuff for pizza nights…which is a great idea).

For our theme, we used two tones of green (a lighter and a darker) along with red, just like the main parts of the caterpillar. I got one tablecloth for a super long table that’ll be green, some red plates that were leftover from my son’s Dr. Seuss birthday (you can tell I’m a librarian, right?)…you get the idea. We’ve reused some of our decorations for years when we remember to grab them, from handmade poufs to a cheap chalkboard sign, because they’re generic enough to work in many ways. Oh, and we skip the balloons and request that our guests do so, as well – they’re horrible for the planet.

– Accept help when offered. This year, I was lucky enough to have my mother, mother-in-law, sister, and brother/sister-in-law all offer to bring something. It’s amazing how helpful that is. I used to get a little, um, controlling about things (I’ll admit it) but I’ve learned to go with the flow a bit more. I still did some ordering of the pizzas and picking up of healthier snacks, drinks, and some cupcakes (see? I used to make EVERYTHING – organic and “real food” – myself…not that there’s anything wrong with that; I genuinely try my best when time allows, and this year it simply wasn’t in the cards) and little odds and ends, but it was such a strain off my mind to have it equally disbursed.

So, make a list of your menu and divvy it up. Even if you only have one family member or friend offer to help, it’s still a little less you have to do

– Don’t keep up with the Joneses. Much like when wedding planning gets out of hand, keep in mind the ultimate goal of the day: in this case, to celebrate the life of an amazing child with people who love them almost as much as you do. Period. That’s it. So, no matter what happens, just let them know they’re loved and special to you.

Maybe the food’s not organic and Pinterest-worthy. Maybe it rained on your outside BBQ and you had to all huddle in a pavilion. Maybe your child made fussy faces during photo ops. Maybe the little one gets sick so it ends up a “parents and grandparents shindig” (which is what happened for Hadley’s 3rd party). Whatever! It’ll all add to the memory and won’t scar a single soul. Seriously. Remember what kinds of parties we had as kids. We survived just fine, right? (One of my mom’s ideas of a party game was “guess the kind of cake this is!” …I kid you not.)

What are your favorite birthday party tips? Do you agree with the ones I’ve shared? I’d love to hear your thoughts in the comments.