Once again finding my brain unable to formulate the words to do Grandpa justice, but trying to get back to living life with him in my head and heart. So…now for something completely different.

For the first time since having Hadley, I’m taking on an honest-to-goodness local acting role. That means it has been since around…hmm…the November before he was born…carry the one…a frickin’ while. A frickin’ while since I’ve tread the boards or learned a butt load of lines or tried to be anyone but “Mama.” Over two years.
Since I’m looking at this experience with new, dare I say baby-like eyes (as much as someone who’s been in a good number of shows can), I thought I’d give a teensy bit of vague insight into the goings-on behind-the-scenes. Nothing enough to piss off the fellow actors, but maybe something of interest. 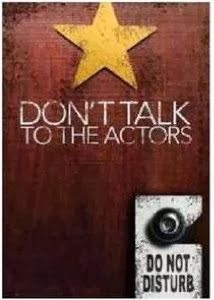 We had our first read-through (well, the only read-through, but whatever) last Friday night. I always go into these things calmly; it’s never as bad or as great as your mind makes them out to be. There’s generally a varied mix of “yay! So-and-so is in this show!! Fun!!” and “Crrrrrap, we only have 5 weeks.” Um, yeah, that’ll be the worst part. Not sure I’ve been in a show that took less than 6 weeks to prepare. Should be interesting.
That said, I’ve also never laughed so hard at a read-through in. My. Life. The show, “Don’t Talk to the Actors”, is quite new for our theater (written in 2009), so the comedy is incredibly fresh and easy to follow…and borderline trashy. Okay, okay, it’s not one to take the kiddies to. But, GOD, it’s good.
The story follows a brand new, naive playwright and his fiancée (me, an also-naive, cross-stitching kindergarten teacher) as he sees his play rehearsed for the first time for an eventual Broadway audience. The two aging actors are well-known in different capacities and both cantankerous in their own hysterical ways. Let’s just say my character is smitten with the older male actor due to his earlier stint on TV (I can relate, having obsessively crushed on several very random older TV guys as a kid).
Before opinions start to arise, the director urges my fiancé not to listen to the actors (who will attempt to change his work and, as predicted, do). Some hilarious scenes and surprises pop up, and overall should be a great night of entertainment for our audiences (and hopefully for the cast, as well).
I was on the fence about going for a part. I read up a bit about the show, but once Grandpa died I thought, “Well, I’ll just wait for next season.” Auditions overlapped with his wake and preparations, so I wasn’t optimistic.
Then, as often happens in community theater, the awesome director (one reason I decided to pursue it — I’ve never worked with him and he’s just a wonderful guy and performer) posted on the theater’s Facebook page that they were still looking for the younger female role. On a whim, I offered my services and the rest is, as they say, history.
Acting out once again.
I’m grateful to have a week off next week and hope to learn a crap load of my lines (if my aging brain can take it).
Now, to find some ironic cross-stitch that I can work on onstage but actually use later to remember the show by – you know the kind I mean, right?
And what the heck does one wear to show a modern-day naive kindergarten teacher from Buffalo? …Asks the school librarian from Upstate NY.

2 thoughts on “Don’t Talk to Meg, Acting Out”