Back at the end of June, I shared a list of my summer plans. I’m pleased with a buttload of what we’ve been able to do; I’m a tad disappointed (or even downright bummed) that a few, I won’t be able to do. At. All. Here’s the updated list:

1. I had already started this undertaking when I posted the list, and guess what! Still not done. Of course. I had done some clothing purging, but have more to do. I have yet to touch our coat closet. I did, however, tackle the toy situation, which in itself feels like a huge victory. But, y’know how pregnant ladies (sometimes) go through their period of nesting? Once the cooler autumn weather hits, I’ll start attacking this. Promise! And I’ll share my endeavors. (Oh, you lucky, lucky people, you.)

2. Bam! Done!! Hadley and I went for some time last week (with a break in the middle of the week, just to avoid meltdowns) to a camp my mom and stepdad rented for the whole family to use. It. Was. Awesome. I needed that. And Hadman even had fun! (I mean, what says summer like this picture?!)

3. *sigh* Okay. The Adirondack Museum trip didn’t happen. I’ll get into the why’s at a later date, but the plans that we had made to hit it up as a family fell through. And I wasn’t about to do that without my man; he’s never been. Eh, ya win some, ya lose some. We are planning to visit the Carle VERY soon. We’re ecstatic that the munchkin will be able to see the Mo Willems exhibit. I know he’s just over one year old, but he’s a F-A-N of all things Mo. He knows his books by illustration and picks them every single story time. We’re hoping that the exhibit’s a hit with him. I know it will be for us!

4. Yeah, I suck at keeping up with the “work” part of summer. I suck. We bought a relatively eco-friendly spray that I still need to use to clean OFF the front porch (and siding on the house). I still hope to at least clean stuff up, but I’m not sure if the paint job will happen this month or not. I’m not going to beat myself up, though.

5. See camping trip above. Sand. Done. 😉 Two birds, one stone!! (Okay, wait. Horrible metaphor. I hit what we’ve deemed to be a woodpecker on my way back up to camp and still feel like a murderer over it.)

6. Make that one “grill”. We have grilled far more than last year, but not everyday…or even once a week. A handful of times. But s’all good. Here’s my infamous grilled pizza recipe if you’re feeling like cookin’ outside.

7. The asterisk means I’m still workin’ on it, but I have at least trimmed and gotten the rest of my tile down (sans the around-the-toilet stuff, since we’ve gotta move that first) and caulked around the tub. My next step is priming and painting the base moulding that we’re reusing. (It’s still poop brown.) It’s gettin’ there!

8. Just like grilling, we’ve done SOME of this. Not everyday, but it’s been nice to get out when we feel like it. We took a few while at camp, and have done a few throughout the summer (even back for my “day in the life” post).

9. It’s in the works. I always have two main reasons that I LURVE visiting Massachusetts; the first is to see some awesome friends (yay, we’ll be able to do this!!) and the second is to hit up Concord (boo, we won’t be able to do this). But, we’re lucky we’ll be able to go at all. Oh, and we’ll be doing some fall shopping (not saying the dreaded “BTS” words out loud) at the outlets, so that’s a cool perk, too. Even Dave is in need of stuff, so it’ll be a family affair.

10. My garden this year has been a bit of a dud. I just got it planted way too late, I guess. I need to be a better planner. BUT, my tomatoes are going like gangbusters! They’re all tiny ones, and many are splitting (I think we’ve got a blight goin’ on), but the good ones I’m hoping to make a nice balsamic salad for the hubs with. So, if I do, I’ll share the recipe. 😉 Oh, and we also learned that the Hadman is totally into the ‘maters. I’m not pushing my prejudice on the kid (obviously; I hate them!!!), and I think it’s awesome that he likes them.

12. Yay!! A few Sundays ago, Daddy, Hadley and I checked out the Utica Zoo. Dave and I went as kids, and it’s perfectly sized for a baby; not too big but just big enough to entertain. He was enamored with the zebras (and they were enamored with him), but all the animals were interesting for him. And apparently they all say “oof.” Even the snakes. (One totally wanted to eat my baby. Back off, scaley!!!)

13. Dave’s done this, I’ve done this, we’re both going to see our Massy friends and I’m working on a catch-up with another buddy this week. We’re gettin’ ‘er done.

14. *deep sigh* I’ve done this. And done it again. And still again. It’s weird; I’ve had waves of calmness followed by thrusts of anxiety-driven headaches. I guess I always get that way when September starts rolling around. But, yeah, I’m working on maintaining the calm. Also depends on Hadley’s level of crazy.

15. I guess I’ve technically accomplished this. I’ve read a few magazines (I lean towards “Real Simple” and hand-me-down “This Old House” mags, with the occasional Eating Well or DIY/house ones thrown in), but have re-started Walden and this rad short compilation of essays and papers on Transcendentalism. What? That’s my idea of a good time. 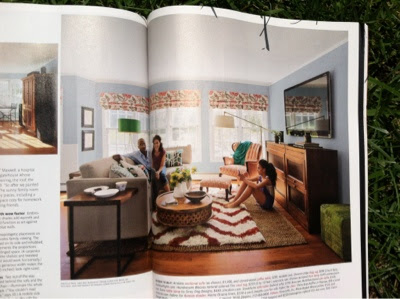 16. I’m actually following my inspiration on this one. Some days I feel like working on my non-fiction piece, others I feel like working on a *top secret* sumpin’ sumpin’ I’m passionate about…so the children’s books (yes, I said “books”) have fallen to the wayside. I’m not one of those “write about something if I’m not in the mood” types of people. Maybe if I assigned it to myself, I’d be better at it. But, yeah, by Christmastime I’m hoping to have finally at least flushed out one of these.

17. Been there, done that! Haven’t gotten to our local one as much as I’d like (I’d say once or twice?) but we’ve been to the Oneida County Public Market a few times.

19. Depending on the day and my little man’s mood, we’ve achieved this. If he’s cranky, the pokey little grass blades will annoy the hell out of him. If he’s in “adventure mode”, he doesn’t think twice about it. The fact that we got him to play in the sand (even while wet and a tad cool) was a miracle.

So, that’s where we are! We’ve done some stuff beyond the list, but seeing how many we have crossed off makes me feel purdy darn good.

What about you guys? Leave a comment! How has Summer 2013 gone for you?? I know it’s been rough for many of my local friends, but let’s think about the happy stuff. Anything fun to share? Have you basked in some sunshine? Discovered a new part of your town? Do tell!