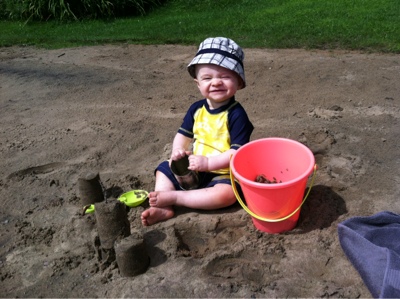 This past week, I schlepped the baby “up north” to the awe-inspiring Adirondacks for some quality time with my family and some ducks…and a deer head named Lois (although “she” was clearly a 7-point buck) which my son was sadly enamored with. I’m telling you, people, it was a good time.

Dave was only able to make it up for one dinner, so we missed our third musketeer horribly, but it was altogether a fun-filled, generally relaxing chance to get away from my daily summer routine of non-funness (boring ol’ everyday) and spend time with all three of my siblings (it’s rare to have us all together at once) and their respective families. We took walks, played some games, fed some duckies, illegally fished off the dock (oops…karma’s a bitch, I only caught seaweed), toasted a few marshmallows, mercilessly made fun of each other, and I even kidnapped my can’t-believe-she’s-a-teenager niece into canoeing across the entire lake. And, for the most part, I ate “normally.”

I had prepped myself mentally (if not physically, ugh) for this last piece. My mother, who is the ultimate planner/worrier, brought all the food (although my sister-in-law’s family brought a ton of goodies, too, since they were bringing up five people vs. two; I thought it was nice of them). It’s not that my mom eats crap; she buys the good cold cuts, the name brand yummy peanut butter, soda, bread, etc. Considering how much she has done for us over the years with an insanely low budget (HUGE Sunday meals, always healthy in the meat-and-potatoes sort of way; technically lots of “real food”), she still makes it a point to buy less but save for the best, even though we’re not under her roof anymore. It kind of brings a tear to the eye, really. Heck, maybe she thinks we’re not doing a good enough job of feeding ourselves. Could be.

But, I know that she and the rest of my family are, for all their strangeness, normal. I’m the oddball. Which is why I prepped, mentally, for the food, but more so for the comments.

I wasn’t about to drag out a week’s worth of my own natural food options. Didn’t want to disrespect the cruise director, plus she had brought more than enough food for everyone. I figured that, for a week, I could put my massive amounts of research and reading about the benefits of an organic, “real food” diet (or, at the very least, HFCS-free eating) aside and just be “one of the group.” No weekday vegetarianism, no looking at the label for naughty things. The one place that I differed was when it came to the baby. It’s relatively easy to keep that under the radar with his jars and pouches of baby food, but the organic cheese sticks, applesauce, apple juice and yogurt I tried to conceal in the fridge gave me away…and the bunch of bananas sitting strangely next to the ones Mom had brought.

The second I put a chip in my mouth, Mom made mention, sarcastically, of her “organic girl.” It actually didn’t hurt my feelings since I knew what she meant by it and it was one of the first times she had really ever made mention that she knew how I ate. She has eyed my grocery store cart when we bumped into each other at Hannaford, and she may or may not read the blog. She knows. The snide-yet-harmless comments (from a sibling or two, as well) continued in drips and drabs for a few days, but mostly they were about the stuff Hadley was eating. Whew. Bearable. For the most part, folks didn’t say anything at all; the chiding I did get was just a continuation of what I’ve heard since I was a little girl.

See, I’m used to the comments, for the most part. Our family is a group of teasers; always has been, always will be. I fall victim to the “Let’s gang up on Bill” mentality at times, myself, too. (Always remembering that I’ll probably be at the center of the next bout.) There was a time that my too-sensitive (not to mention dramatic) nature took them to heart. But, not seeing much of these close family members helps most of the comments bounce off one’s back and remember childhood fondly.

And it’s not like I’m not used to being the oddball, anyway. We’re each pretty weird in our own ways, but apparently I was a tad more “off” than the rest of them. It was the same way in school, so by the time I had weirded my way through high school, I had grown into my skin. Monkees-lovin’, tennis-and-oboe-playin’, non-drug-doin’ hippie as I was.

And, y’know what? In a weird way, this trip helped to remind me of who I am. I’ve become such a worrier of what others think of me that I had forgotten how comfortable it was to just be myself. Sure, I’ll probably always be a tad self-conscious around others (especially when in volatile situations…well, doesn’t THAT sound mysterious?), but the occasional reminder that it’s okay to be an oddball is refreshing, isn’t it?

At least, it’s what I hope to teach Hadley. After all, who’s more in touch with who they are than babies? Don’t lose that, son! Don’t you let it go.

What about you? Are you proud of your weirdness? What makes you especially crazy? Go ahead, let yo’ freak flag fly!

One thought on “Oddball”