Skip to content
We recently got a so-sweet birthday card for Hadley from our kind-hearted elderly neighbor, along with a $5 bill and a shakily scrolled note that said “piggy bank.” I teared up, it was so touching!

So, since we’ve received a couple of banks which I consider to be more collectible than everyday use (maybe as he gets older, we can pull one out to use…but if he’s “all boy” as he currently is, that may be when he goes to college!), I tucked into the back of my memory that we should keep an eye out for a cheap-ish bank. We’re all about teaching about money and savings early on (even though I’ve still had a tough time, myself, getting into the budgeting habit, sigh.)

About a week later, we were perusing the shelves for some small housely changes and this guy jumped out at us. (Not literally. That would’ve been creepy.) 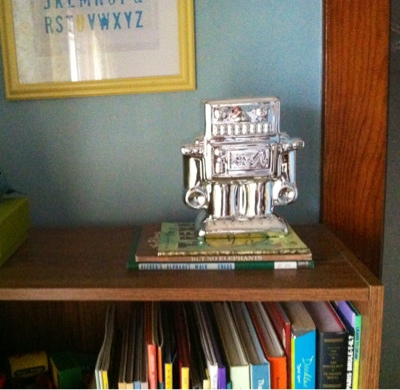 And, just for fun, here are a couple of other Target lovelies…

A lamp that I bought awhile back (either at TJ Maxx or Target, can’t remember which) that “lives” on Dave’s side of the bed has served its purpose well, but I changed the lampshade from a dark gray/black-ish one (a tad too much detail goin’ on) to this angled shade… 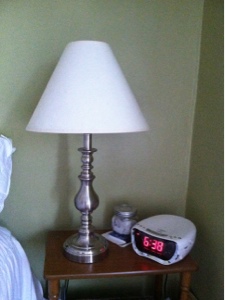 …which didn’t serve us well. Every time a cat jumped up to alert us that “BREAKFAST TIME IS IMPENDING!!! 45 MINUTES AND COUNTING!!!” it would end up cockeyed and even ended up with a slightly warped area from a too-hot bulb. So, I grabbed this one for under $20… 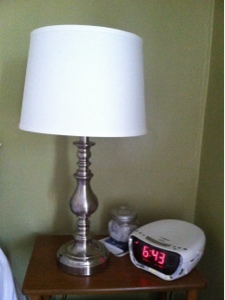 Even Dave says it’s much better and dulls the brightness some. Coming from the guy who doesn’t notice such things, I’d say that’s an accomplishment. Oh, and still figuring out the art and possible headboard, but at least he’s a part of the conversation (as are you!). 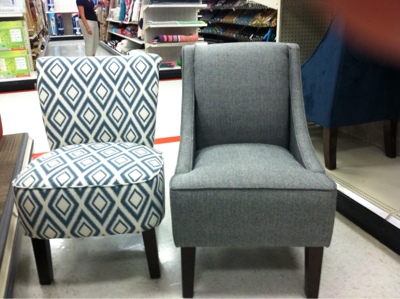 And Dave patiently waiting while I carted the baby around the furniture aisle to see if they were keeping any other chairs from me. What a patient husband I have. Our dorky daddy. 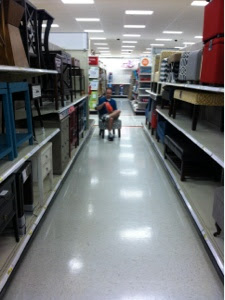 There’s one more Target find that we grabbed to help us tidy up the toddler toys (gasp, did I just say “toddler”?? He’s technically not a toddler until he starts walking for realsies, right? Right??), but we’ll save that for next time. I’m sure you’ll be waiting with baited breath. 😉