Skip to content
About a week and a half ago, I *finally* got around to planting my seeds for the year. Yes, I’m starting from seed — what can I say, 2013 must be the year of bravery. (Or stupidity. Anyone’s guess.) And, unfortunately, between the craziness of life and the craziness of our weather, I was much later than I would’ve liked. Oh, well! If it doesn’t work, there’s always next year.

So, going into it with a can-do attitude, yet not expecting too much, imagine my delight when I saw these little babies spurting up in less than a week —

The rows look crooked, but it’s the angle…I should’ve rotated the pic. Just turn your head to the right.
See? Straighter. And raise your hand if you actually tilted your head.
Hey, there’s no shame! I’m doing it right now! 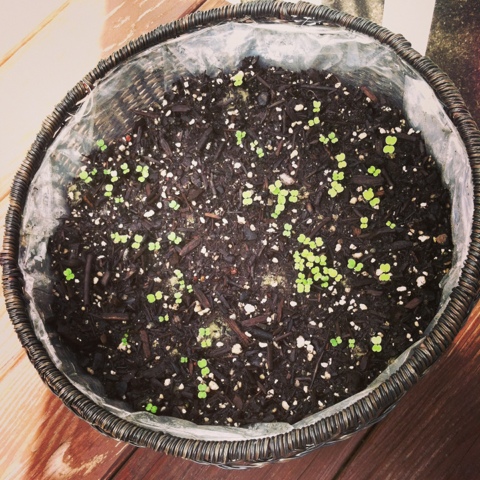 We’ve got several herbs in planters on the back deck (which I have yet to “deck out” for summer, mostly because I’m hoping to scrape, sand and paint the floor…with what time, I have no idea), and both raised boxes are full. If things don’t work out in the boxes, I’m considering trying for some late season veggies.

Oh, and my mom was kind enough to give me a hanging planter (with dirt, wahoo!) to transplant my crazy strawberries. I know it’s a tad late (or early, depending on your zone) to transplant, but I’ll try it out. We’ve got crazy chipmunks and other little creatures who like to steal the berries before I get to them, so it might be worthwhile to hang ’em out of reach.

We were also gifted a Meyer lemon tree by Dave’s parents. We all ooooed and aaaahhhhhed over it when we saw it in a local nursery, but Dave and I decided not to purchase it after hearing (from a man who works there) that it’s a bit of a scam since they’re not meant to be grown in our area. Oops. Oh, well! Like with the rest of the plants, we’ll give it a try! I hate to say that the fruit is already shriveling in comparison to this picture (they ship them from Florida when the fruit’s starting to grow…man, what a racket), while all of the other plants seem to be thriving with our TONS of moisture followed by a random hot, sunny day or two, back to rain again.

It’ll be neat to see if it can handle our wackadoo weather patterns! And, I’m not gonna lie, I’d use the heck outta those lemons. 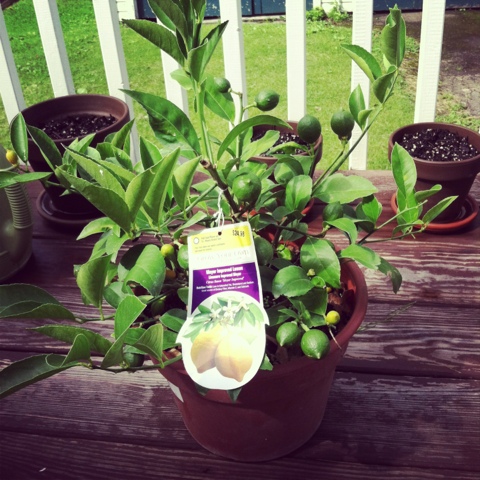 Oh, and one simple “note to self” (and any other newbies out there) when it comes to planting: WRITE $%&# DOWN!!! I planted after school one day and was only about 3/4 done before Dave came sauntering out back holding our little munchkin, so while I did get to finish, I then had to go into Mommy Mode, washing us up (the kid eats dirt — I’m one proud mama!), making dinner, and going through the rest of the motions. This meant that I, of course, totally forgot what I planted and where. Whoops. Doy.

I swear my intentions were there! I brought out my “handy-dandy…note-book!” (I miss Steve…the pre-I’ve-gotta-shed-my-squeaky-clean-image-Steve), ready to jot it down and everything. All I know is that I planted a few rows of radishes in the front box, between a few other vegetables, because they’re good for the soil (and I fondly remember eating them right out of my grandfather’s garden as a child). Now that I’m getting more sprouts (way more than the above photo), I’ll start figuring out what’s what and matching them to my packaging and my prior note-taking on what plants go with which other plants. And at least I have a pretty good eye for identifying seedlings. Whew!

So, once school is over and I’m able to breathe again, out to thin-thin-thin I go! And I was wicked relieved when Dave recently told me that, during a conversation with my stepdad (who’s pretty into his garden, along with my mom…we’re lucky, though, they get deer up the wazoo), he seemed genuinely, kindly impressed that we were starting by seed. I always thought they’d think, “That crazy daughter of mine…” Oh, and they had a friend who started his late and it was the best crop he’d ever had. Fingers crossed that it’s one of those kinds of summers.

And for those of you who haven’t already seen my favorite picture (as of late) plastered on Instagram and Facebook, here’s a shot of that night o’ digging (yes, I garden barefoot/with flip flops) —

Anyone else hard at work trying to grow something — anything?! Do tell!