Skip to content
Day 2 of summer vacation (excluding weekends) and we’re hangin’ in there. We’ve had storms (and pretty insane ones) since Sunday, to the point where there were mudslides not far from my school and they’re still in a state of emergency. So, yeah, I’ve got no complaints. Except lunch. #firstworldproblems #imlucky

You might not think so, but there are some challenges figuring out what to do for lunch when you’re not working all summer. Sure, it’s tough to figure out lunches for work, but it’s so easy to fall into a dangerously unhealthy habit. During the year, you get into the swing of things and figure out what works for you — namely, planning. Either taking leftovers or always having a couple of go-to lunches in the event that leftovers are lacking.

I’m used to eating small snacks throughout the day (with one main “meal-like” item like leftover pasta or a sandwich). In the summer, especially chasing a very active 11 1/2 month-old around, it’s easy to forget to, well, eat. So, while I don’t quite get in the same snacks as before, I’m trying to maintain a semblance of normalcy (not just with lunches, but more on that in a moment). I’m buying some of the same stuff that I usually gobble up whilst working — organic cheese sticks, yogurt, peanut butter, fruit (the first two (and maybe fruit) are sharable with the munchkin, woohoo!), but I realized a food item that went something like this —

rays of sunshine stream into the house

I am suddenly struck with the oh-so-simple idea… 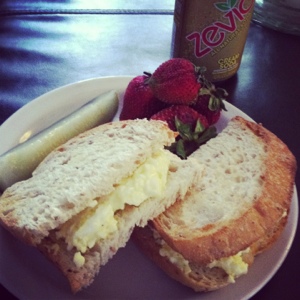 Ha. Yeah, I just did that. Don’t question, just come along for the ride.

For some very, very strange reason, the ladies in my family (namely my mama and deceased grandmother…possibly my sis) have this thing for egg salad sandwiches. I’ve had quite possibly a thousand in my lifetime. Yeah, Grandma made them A LOT…and we spent time at her house A LOT. So, thanks to my ever-present idolization of the past, there’s a certain way I must eat an egg salad.

1. Toasted bread. But not too toasted. That painful crunch of a too-brown piece of bread? Ain’t nobody got time for that.

2. No frills. Mayo + hard boiled egg (this is the part I have a hard time with, particularly cooking it enough so that it’s not “soft boiled” and the damn shell not taking half the whites with it) + salt ‘n peppa (not the singing group). No cayenne. No olives. None of that crap. Again…nobody got time….

3. Sides. Now, if I want to admit it, I’m not being a complete purist. Sometimes I use wheat bread and, in the case these days, generally a peasant bread (from our local bakery, Heidelberg). Back in the day, it was squishy soft bread (again, often toasted…what the?! Occasionally the squishy soft worked well with the egg salad, but it was nuts not to toast it at any. Possible. Opportunity.). Also, to be honest, we had a stack o’ Pringles (ugh…if those aren’t modified, genetically and otherwise, I don’t know what is) and a hunk of Velveeta (again, modified to the hilt!). So, yeah. Those I don’t do. Sometimes, we’d have a pickle, so I hooked myself up with one today, but I DID partake in one “must-have.” I had me a nice mug o’ chocolate milk.

Side note: The Hadman is a fan of pickles. He literally crawled all over me to get a bite of the thing. Dave says that if this trend sticks, he takes after me. (We’re already discovering that, personality-wise lately. Poor thing. Poor us!)

So, all of the above will be happening this summer…lots. I may (vegetarian M-F be damned) even have a tuna sandwich from time to time, but egg salad will be my main go-to. Oh, and in case folks weren’t aware, we’re more focused on “real” food, sustainable/environmentally conscious decisions (the chickens that gave us these eggs, as often as we can get them, are pasture-raised and humanely treated)…and yumminess. Cholesterol? Fat content? We don’t believe calorie-counting is healthy. Being aware of your food and its sources is healthy.

Oh, and our weather lately has been ca-ray-zee! It’s uber hot and humid, which is fine, but throw in some thunderstorm and flash flooding and…whew, let’s just say we’re very lucky to not be effected like others in the area. Bananas!

A second “oh, and” is that yesterday was our first day doing cloth dipes!! We’re dealing with a period of adjustment, so I’m apprehensive to say “it’s a complete success, I’m an idiot for waiting!” because I don’t quite feel that way yet. I’ve gotta get into the habit of changing him more (sucka leaks…and it’s not from the dipes, they’re doing great, he just produces piss like nobody’s business) and I feel like a monster ate half of my BumGeniuses. Need. More! Where’d they go?? Wiiiiinstoooonnn…you may THINK you’re the baby, but you’re not. Not literally, anyway.

But his butt is SOOO cute in them, especially after I’ve changed him and he doesn’t have anything else on. A 3/4 naked baby body + adorable diaper colors = cuteness overload. I’ll be back with an update after we’ve been at it for a week or so.

BTW, sorry for the loopiness and…wait, let me check. Yes. Yes, there was mild swearing. Sorry for that! Next’ll be better, promise!